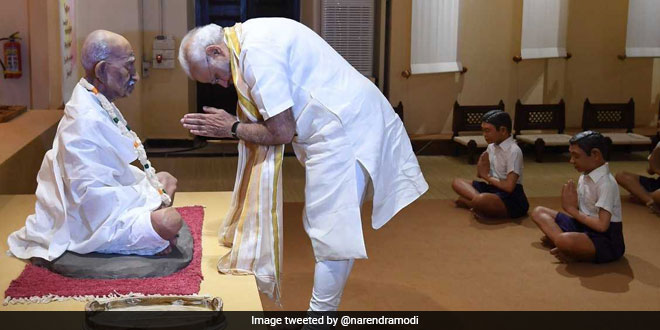 Rajkot: Prime Minister Narendra Modi was awarded ‘Champion of Earth’ by United Nations for his pioneering work in championing the International Solar Alliance and promoting new areas of cooperation on environmental action. This award is considered as UN’s highest environmental honour and is awarded to outstanding leaders from government, civil society and the private sector whose actions have had positive impact on the environment. This award was shared by French President Emmanuel Macron. On World Environment Day on June 5 this year, PM Modi announced an ambitious plan to do away with single-use plastic items including carry bags, straws and water bottles among others by 2022.

While addressing a gathering after inaugurating a museum dedicated to Mahatma Gandhi, PM Modi paid homage to Mahatma Gandhi’s life and said that Gandhiji was the most deserving candidate for the United Nations ‘Champions of the Earth’ award. He said, “Cleanliness was an important aspect of Gandhi’s life and he used to say, if he had to choose between cleanliness and freedom, he would choose cleanliness first, such was his commitment towards cleanliness”. PM Modi added, “Every Indian should have it in their hearts that a barrister (Gandhiji) gave up everything for the country and freed the country from the shackles of foreign rule”.

Inaugurated the Mahatma Gandhi Museum in Rajkot. The Museum is at the Alfred High School, which is associated with the early years of Gandhi Ji.

The next time you visit Rajkot, do visit this museum. pic.twitter.com/oNeZOP6Njr

Delighted to be in Rajkot. Addressing a public meeting. Watch. https://t.co/tjPoiwa1yF

“The United Nations has said 3 lakh children were saved due to the cleanliness movement (of the NDA government). What bigger humanitarian work can there be?” he asked. The Prime Minister said that the most deserving person for this honour was Mahatma Gandhi and also the 125 crore citizens of the country.

Written with inputs from Press Trust of India.