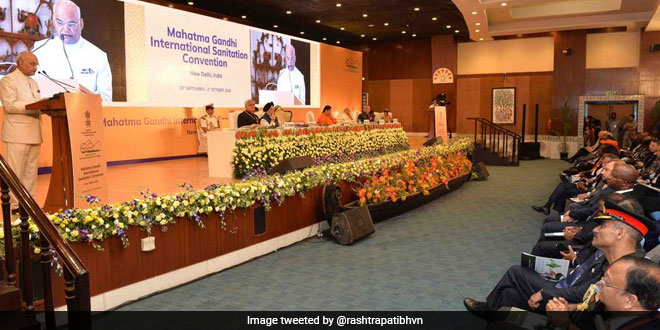 New Delhi: President Ram Nath Kovind inaugurated a three-day Mahatma Gandhi International Sanitation Convention on September 29 in New Delhi which was being organised by the Ministry of Drinking Water and Sanitation to mark the beginning of the 150th birth anniversary celebrations of Mahatma Gandhi, also coinciding with the fourth anniversary of the launch of Swachh Bharat Mission. In the Convention President Kovind said, “Swachh Bharat has become a mass movement and a revolution is playing out in real time.”

#PresidentKovind inaugurates the Mahatma Gandhi International Sanitation Convention in New Delhi; says Swachh Bharat is a revolution playing out in real time. The mission provides every one of India’s 1.3 billion people an opportunity for a dramatic leap pic.twitter.com/Hjbm32Fi7B

President Kovind said the Swachh Bharat Mission is not just about physical cleaning; it is about spiritual, social cleansing and reawakening which represent the spirit of our independence movement.

Also Read: A Look Back At How India Celebrated The Mega 15-Days ‘Swachhata Hi Seva’ Campaign

The President hoped that the sessions and proceedings of the Convention will result in actionable ideas and in a powerful statement towards the combined resolve to achieving the Sustainable Development Goals (SDGs), and particularly SDG 6 which calls for ensuring availability and sustainable management of water and sanitation for all.

Vice President M. Venkaiah Naidu asserted that there is still some distance to travel but with the commitment of the people to the mission, India is on track to achieve open defecation free status by 2019 which is going to significantly contribute to the global achievement of SDG 6.

There is still some distance to travel, but we are committed & India is on track to achieve open defecation free status by 2019-the 150th birth anniversary of Mahatma Gandhi. This is going to significantly contribute to global achievement of SDG6. @myogiadityanath @umasribharti

Vice President Naidu also admired Prime Minister Narendra Modi and said, “It is the result of a very intelligent and carefully planned campaign the clarion call for which was made by the Prime Minister of the nation. He led from the front and his countrymen followed dutifully and wholeheartedly.”

It is the result of a very intelligent and carefully planned campaign the clarion call for which was made by the Prime Minister of the nation. He led from the front and his countrymen followed dutifully and wholeheartedly. @myogiadityanath @umasribharti #SwachhBharat pic.twitter.com/MjzzU6ggHC

Lauding Swachh Bharat Mission President Kovind said that improving access to sanitation and eradicating open defecation have enormous implications. They are critical social and economic investments. He also invited the representatives of other countries to use the mechanism under Swachh Bharat Mission to improve sanitation in their respective countires, Mr. Preseident said, “Our successes with Swachh Bharat, our attainments in the sphere of sanitation, our methods and our mechanisms, are available to all of you, to all the friendly countries present here, and others as well, to use as you deem necessary.” He also said, “As an instrument of mass mobilisation, as a people’s movement, and as a national goal towards which there is near total commitment, Swachh Bharat represents for me the spirit of our Independence movement”.

In the end, access to improved sanitation is not a target and a goal for one country or the other – it is the interlinked destiny of humankind #PresidentKovind

While addressing the participant, the President urged the citizens of India to strive for a clean India as a tribute to the Father of the Nation on his 150th birthday. He also said, “Absence of immediate toilet facilities, at home, in the work-place and – perhaps this is most vital – at school, place an unacceptable burden on our daughters. No young girl should have to give up school only because a girls’ toilet is not available”

Gandhiji’s blessings are with us as India strives to eliminate open defecation in its entirety by October 2, 2019. This is the best 150th birthday gift we can give Gandhiji #PresidentKovind

Talking about the progress of the mission, President Kovind said that the relentless and strenuous labours of the past four years have led India to significant milestones. He further said sanitation coverage was at 39 per cent at the start of the mission in 2014, which has touched almost 95 per cent. “About 85 million rural households and six million urban households have begun to use toilets for the first time. Swachh Bharat has helped them renounce the troubling practice of open defecation,” he said.

He, however, also felt achieving universal access to adequate and equitable sanitation and hygiene by 2030 is a major challenge in many parts of the world. Drinking water, sanitation, and hygiene are central to sustainable development goal, he said.

Emphasizing on the importance of Swachh Bharat Abhiyan, Chief Minister of Maharashtra Devendra Fadnavis said, “The mission has had a cascading effect on people’s life. Girls have started going to schools more. The dropout rate has reduced and they are looking forward to attending schools”, says Shri Devendra Fadnavis, Chief Minister of Maharashtra, India.

"Our challenge, of course, was creating the infrastructure but it also affected our economy. It gave rise to a number of jobs. A lot of innovation was also involved." CM of Maharashtra Shri @Dev_Fadnavis on how the #SwachhBharat Mission impacted lives in his state.#MGISC

At the end of the convention, Vice President Naidu expressed his gratitude towards the participants saying, “We are grateful for your participation and for your experiences shared in this convention. Let me end by reiterating our firm commitment to eradicate open defecation from our country and the world. Let us further accelerate the campaign against open defecation.”

We are grateful for your participation and for your experiences shared in this convention. Let me end by reiterating our firm commitment to eradicate open defecation from our country and the world. Let us further accelerate the campaign against open defecation. #SwachhBharat pic.twitter.com/gwHak9gJxy

The Convention was also attended by Chief Minister of Maharashtra Devendra Fadnavis, Minister of Drinking Water and Sanitation, Uma Bharti and Executive Director UNICEF Henireitta Fore along with ministers and delegates from 68 countries.

‘Gandhi ji Was The Most Deserving Candidate For The ‘Champion of Earth’ Award’: PM Modi