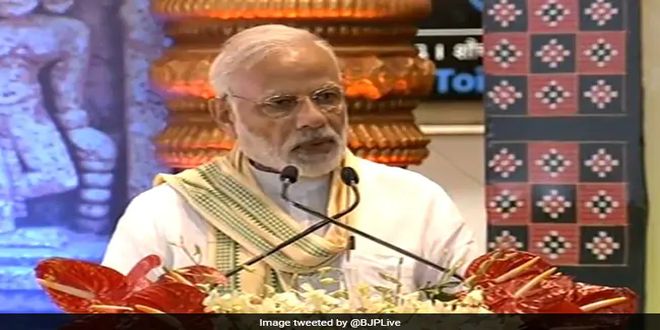 Mumbai: Recognising Prime Minister Narendra Modi’s commitment towards eliminating single-use plastic items in India by 2022 and his work in championing the International Solar Alliance, United Nation’s has bestowed him with, ‘Champions of Earth’ award. The award, which is considered to be UN’s highest environmental honour is awarded to outstanding leaders from government, civil society and the private sector whose actions have had a positive impact on the environment. The title is also shared by Emmanuel Macron, President of France.

Emmanuel Macron, President of France and Narendra Modi, Prime Minister of India, are recognized in the Policy Leadership category for their pioneering work in championing the International Solar Alliance and promoting new areas and levels of cooperation on environmental action, including Macron’s work on the Global Pact for the Environment and Modi’s unprecedented pledge to eliminate all single-use plastic in India by 2022, said in a press release by United States.

The awards were presented on the sidelines of the 73rd UN General Assembly during the Champions of the Earth Gala in New York on September 26. The gala brought together a cross-section of world leaders and influencers to celebrate momentum for change in defence of planet Earth.

It was on World Environment Day (June 5) this year when Prime Minister Modi’s government had announced its ambitious plan to drive out all single-use plastic items including carry bags, straws, and water bottles among others from the country by 2022.

“We make a solemn pledge that we will eliminate all single-use plastics from our beautiful country. This India of our dreams (New India) will be single-use plastic free,” Union Environment Minister Dr Harsh Vardhan had said.

Along with the declaration of eliminating plastic usage, the Prime Minister signed UN Environment Clean Seas campaign that was launched in February 2017 to fight marine plastic litter to send out a strong message within the global community.

BJP national President Amit Shah tweeted, “It is a matter of great pride for every Indian that PM @narendramodi has been awarded the UN Champions of the Earth Award in the Policy Leadership category. This is the UN’s highest recognition for people whose actions have had a transformative impact on the environment”

This honour has been bestowed on PM @narendramodi for his pioneering work in championing the International Solar Alliance and promoting new areas of levels of cooperation on environmental action and unprecedented pledge to eliminate single-use plastic in India by 2022.

Calling it as a ‘global recognition’ for Prime Minister’s ‘monumental initiatives towards cleaner and greener world’, Dr Mahesh Sharma, Minister of State Environment, Forest and Climate Change said, “Hearty Congratulations to hon’ble PM @narendramodi on being conferred the UN’s highest environmental honor #ChampionsOfTheEarth award in Policy Leadership category. It is a global recognition for his monumental initiatives towards cleaner & greener world.”

Hearty Congratulations to hon’ble PM @narendramodi on being conferred the UN’s highest environmental honor #ChampionsOfTheEarth award in Policy Leadership category. It is a global recognition for his monumental initiatives towards cleaner & greener world.https://t.co/90anzLQshR

This is second time when an Indian has been honoured with this prestigious award for efforts towards beating plastic pollution. In 2016, lawyer-activist Afroz Shah had bagged the ‘Champions of the Earth’ award for spearheading world’s largest beach cleanup at Versova beach to drive out plastic litter.