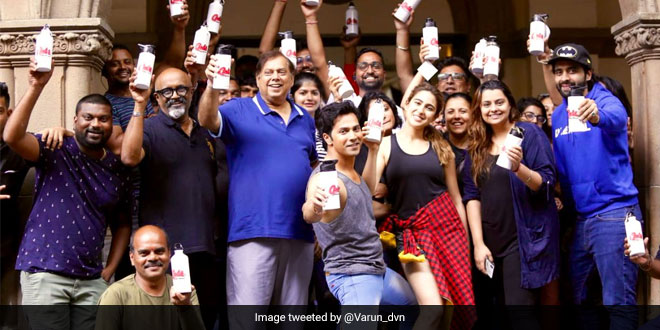 New Delhi: “Superb gesture by the team of #CoolieNo1! Happy to see the film world contributing towards freeing India from single-use plastic,” said Prime Minister Narendra Modi on Thursday as he lauded the crew’s effort and support towards ‘Say No To Plastic’ initiative kick-started by the government recently. PM Modi initiated the battle against plastic this year from the ramparts of Red Fort while addressing the nation on the 73rd Independence Day. Soon after Independence Day, PM Modi took his appeal for a plastic-free India forward during his weekly programme, Mann Ki Baat. He appealed each and every citizen to be a part of plastic-free India movement.

Participating in the plastic-free movement, Actor Varun Dhawan had shared a picture of the Coolie No 1 team and said,

Being a plastic-free nation is the need of the hour and great initiative taken by our prime minister and we can all do this by making small changes. The sets of #CoolieNo1 will now only use steel bottles.

Being a plastic-free nation is the need of the hour and great intiative taken by our prime minister and we can all do this by making small changes. The sets of #CoolieNo1 will now only use steel bottles. @PMOIndia pic.twitter.com/T5PWc4peRX

After PM Modi’s appreciation, Varun Dhawan once again took to his social media to thank PM Modi for the campaign. He added,

He further said, “I believe each and every citizen should contribute towards making India swachh. It should be everyone’s resolution to make India no 1 when it comes to cleanliness.”

Directed by David Dhawan, starring Sara Ali Khan and Varun Dhawan, Coolie No 1, is set to release on May 1, 2020.

On Wednesday, PM Modi also launched Swachhata Hi Seva 3.0, a cleanliness initiative building up to Gandhi Jayanti on October 2 with a call to action ‘Say No To Plastic’. He said,

I urge every self-help group working in villages, from civil society, from social organizations, from youth clubs, from women’s clubs, from schools and colleges, from government and private institutions, to every individual organisation to join the campaign. We have to make our country free from plastic. We have to do this for our future generation, for our children..

The centre is looking to impose a nationwide ban on plastic bags, cups, straws to name a few on October 2 and lay the foundation of a new campaign against plastic waste just like Swachh Bharat Mission.

“Single-Use Plastic To Be Banned In A Phased Manner”: Ram Vilas Paswan