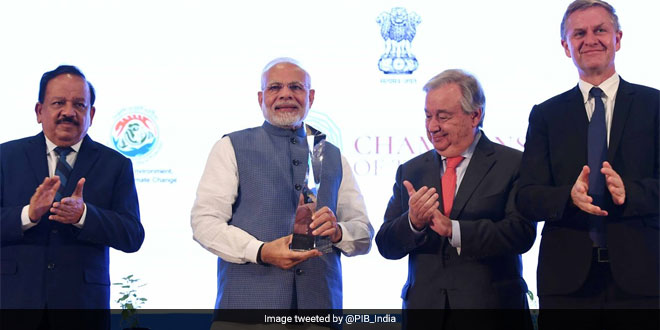 Mumbai: “I dedicate this award to the citizens of India, to all those women who have made recycle and reuse a part of their lives, to those tribals, who love forests more than their lives, of those fishermen, who take only that much from the sea what is required for their livelihood and of those farmers for whom cycle of seasons is same as cycle of life,” said Prime Minister Narendra Modi as he received United Nations’ highest environmental honour, Champions of the Earth award for international solar alliance and efforts towards eliminating single-use plastic by 2022. United Nation Secretary General António Guterres presented the prestigious award on September 27 in a special ceremony at the Pravasi Bharatiya Kendra in New Delhi.

In his ceremonial address, the Prime Minister spoke about a variety of environmental challenges and how India is planning to deal with them with an inclusive policy. Talking about producing clean energy, he said,

Indian culture has always considered nature to be alive. We consider the environment as a living entity functioning in a balanced ecosystem. Indians, especially people living in rural areas have always shown their commitment towards protecting the environment through initiatives like waste-to-wealth or waste-to-energy, organic farming and so on. In the last four years more than 10 crore households have been given LPG connection of which over five crore households have been associated with Pradhan Mantri Ujjwala Yojana (PMUY). The PMUY aims at providing clean-cooking fuel to the poor households, which are otherwise vulnerable to various health hazards associated with indoor air pollution and bringing in qualitative charges in the living standards.

India is effectively tackling the problem of indoor air pollution by providing clean fuels in millions of households. I have seen the plight of refugee women who walk miles to procure wood for cooking only to have their health compromised. India’s effort towards cutting down indoor air pollution is commendable.

Further talking about the problem of air pollution in India, Prime Minister Modi said that his government is committed towards providing clean air and for the same a National Clean Air Programme has been chalked out. Talking about cutting emission standards he said,

In the next two years, we hope to cut emission standards by 20-25 per cent of what they were in 2005, and by 2030 we aim to cut them by 35 per cent. We are focusing on providing clean fuel to everyone. We are working towards making roads and national highways eco-friendly by establishing green corridors in the country.

Prime Minister Modi also highlighted the issue of plastic pollution and said that by 2022 the government is confident of eliminating single-use plastics from India.

Erik Solheim, Executive Director, UN, who was also present at the event said that India may not be able to do away with plastic items in one day but setting a target will surely make an impact.

We have seen states like Maharashtra and Tamil Nadu work towards eliminating single-use plastics. This has been possible only because a vision to ditch plastics was created through the plastic ban. Plastic ban in Indian states will not only provide a healthy environment but will also set an international example.

Mr Solheim quoted Mahatma Gandhi’s famous saying on swachhta, ‘cleanliness is next to godliness’ and said that Swachh Bharat Abhiyan is an effective way to honour Gandhiji’s vision of a clean and an open defecation free India.

Minister of External Affairs, Sushma Swaraj said that Champions of the Earth Award is a fitting recognition of his leadership towards making our world a cleaner place. Dr Harsh Vardhan, Environment, Forests and Climate Change echoed Ms Swaraj’s words and said India is working towards developing a sustainable economy and the Clean India Mission is the biggest example of that.

“More than 8 crore toilets have been constructed and 25 states, 5 lakh villages are free from open defecation. We are working towards reducing hazardous waste through mass awareness,” Dr Vardhan said.

Prime Minister Modi and French President Emmanuel Macron were jointly awarded the UN’s highest environmental honour for their pioneering work in championing the International Solar Alliance and promoting new areas of cooperation on environmental action. Addressing an event in Rajkot on Sunday, Prime Minister Modi had said cleanliness was an important aspect of Mahatma Gandhi’s life and the father of the nation was the most deserving candidate for the UN green award.

Why Toilets Remain Aspirational For The Urban Poor Despite Subsidies