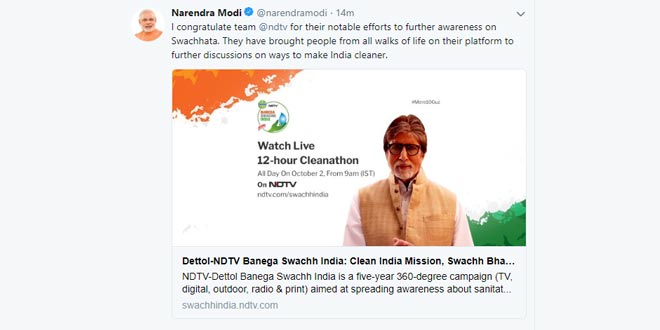 Lauding the efforts of the campaign, Prime Minister said, “I congratulate team NDTV for their notable efforts to further awareness on Swachhata. They have brought people from all walks of life on their platform to further discussions on ways to make India cleaner.”

I congratulate team @ndtv for their notable efforts to further awareness on Swachhata. They have brought people from all walks of life on their platform to further discussions on ways to make India cleaner. https://t.co/zX1kzZevud

This is not the first time Prime Minister has praised the swachh efforts of the campaign. Last year also, Prime Minister took it to social media and said, “I laud @DettolIndia & @ndtv for the initiative. This timeline has many inspiring efforts on cleanliness. #Cleanathon https://twitter.com/swachhindia”

All About The 12-Hour Swachh India Cleanathon

At 9 in the morning, with clean, green and healthy India as the agenda of this year, Campaign Ambassador Amitabh Bachchan kick started the 12-hour cleanathon and urged everyone to turn the dream of Clean India-Healthy India into a reality. He even initiated a ‘Plant a tree’ challenge under which he asked individuals to plant a tree, give it a name, talk to it, nurture it, and share a photo or video with Mr Bachchan which he will share on his social media.

T 2950 – Plant trees and upload your photos and videos with #mere10guz pic.twitter.com/NkEWrRETkC

From National Security Guard planting 20,000 trees in Manesar in Gurugram, trainee soldiers cleaning the streets of Hyderabad to voluneers cleaning up underpass in Bengaluru, various cleanup and plantation drives were organised across India, as part of the cleanathon.

Apart from the cleanup drives at various locations, many Chief Ministers, celebrities, and well-know personalities joined the Cleanathon through the day. While Jharkhand Chief Minister Raghubar Das and Lieutenant Governor of Puducherry Kiran Bedi declared the state and Union Territory open defecation free, Chief Miniser of Punjab, Captain Amarinder Singh talked about the problem of stubble burning in Punjab, which is one of the major reasons behind air pollution in Delhi.

Actor and politician Jaya Bachchan raised the issue of lack of space to plant trees and the unlawful act of manual scavenging. Actor Parineeti Chopra along with Arjun Kapoor discussed the issue of plastic pollution and how it is destroying our water bodies and taking the life of thousands of fishes.