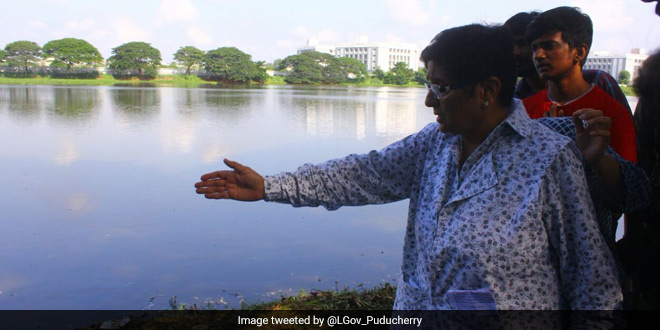 New Delhi: Kanakan Eri is a lake that is located at a distance of approximately 10 kilometres from Puducherry and The International Union for Conservation of Nature and Natural Resources (IUCN) has recognised this lake as one of Asia’s important wetlands. This lake is also the critical source of water for the Union Territory and the adjoining places. Livelihoods of many people also depend on this lake. As with all other water bodies in India, Kanakan Eri too is grappling with issues of water contamination due to indiscriminate waste and sewage disposal. Lieutenant Governor Kiran Bedi highlighted the plight of Kanakan Eri during one of her now famous weekend field trips to monitor cleanliness around Puducherry.

‘Field visits have no financial cost but produce results,’ says Lieutenant Governor Kiran Bedi on her visit to Kanakan Eri, as part of 104th weekend rounds on Sunday. This was Kiran Bedi’s second visit to Kanakan Eri. Last year, Ms Bedi visited the lake and asked authorities and NGOs to come forward and take action to maintain, develop infrastructure and suggest plans to ensure the water body is free from contamination.

On her recent visit, to check the progress made since her earlier visit, the Lt Governor expressed satisfaction over the work carried out by the stakeholders, but found that the lake is still being contaminated by drain water from adjacent residential localities.

She said, revisited a Water Body to review progress. Situation improved yet more needed. It brought together all stake holders for collaborative work.

Revisited a Water Body to review progress. Situation improved yet more needed.
It brought together all stake holders for collaborative work pic.twitter.com/d7KoQPJ40e

To stop the contamination of water further, she asked the officials of PWD and Pollution Control Board to take steps and ensure that drainage water is diverted to a treatment plant.

Similarly, she directed the officials that the liquid medical wastes coming from government hospital nearby should not be discharged in the lake. Ms Bedi has also asked the officials of the Municipality of Oulgaret within whose jurisdiction the lake is situated to take steps to construct a toilet to prevent open defecation by the people.

In order to sustain the efforts being made by the authorities and the government, the Lt Governor has said that each review visits will be documented and communicated to all concerned departments.