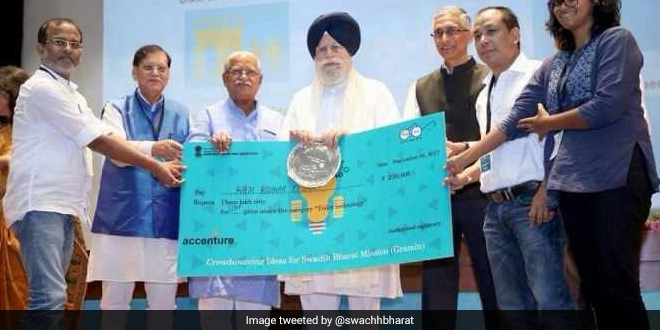 To further spread the message of the Swachh Bharat Abhiyan’s which is about to complete three years, Ministry of Drinking Water and Sanitation invited innovations in the field of sanitation practices of monitoring usage of toilets, behaviour change and toilet technology, as part of the Swachh Bharat Hackathon (Swachhathon 1.0). The Awards ceremony, to recognise the innovations were held on September 8 in New Delhi. Along with several winners, Arunachal Pradesh bagged home an award for its innovative bamboo toilet technology.

While twin pit toilets have become the symbol of sanitation for the whole of Swachh Bharat Abhiyan, India’s vast and varying geography must also be taken into consideration. Toilet construction is difficult across rough terrains and for states like Arunachal Pradesh, where the terrain is uneven in most parts of the state, alternative sanitation solutions are the key to eradicate open defecation. The bamboo toilet was first built in Arunachal Pradesh under the supervision of Ram Prakash Tiwari, Junior Engineer, Yupia Division. Yupia division, which is a part of the Papum Pare district in eastern Arunachal Pradesh, has uneven mountainous terrain where building a twin-pit toilet was a challenge. When Mr Tiwari visited the division for field visits, he realised that instead of cement and bricks, bamboo could be a better option to use for building toilets in hilly terrains.

What began as a mere experiment in 2015 has been successfully replicated across many rural areas of Arunachal Pradash. When the first bamboo toilet was built successfully in Yupia, we decided to build similar models across similar terrains. The recognition of this sanitation solution will be beneficial across all rough terrains in the country which are facing sanitation crisis, said Lupalum Kri, Chief Engineer, Department of Drinking Water and Sanitation, Arunachal Pradesh.

A slightly even place is chosen in a rocky area and twin pits are dug, surrounded by strong bamboos on all four sides. Instead of the weight of bricks and cement, bamboos support the toilet structure and provide similar durability. The bamboo toilets also had containers made of bamboo to store water inside the toilets, so that the toilets do not run out of water. Bamboo’s availability in Arunachal Pradesh was another reason why Mr Tiwari was insistent in the pilot project becoming successful. Transportation costs for brick and cement would not be incurred if bamboo was extensively used to build toilets.

The main cost for building a toilet is in bricks and cement. We realised that if that came down, the cost incurred would be equal to the amount that was provided as Swachh Bharat subsidy. Hence bamboo was used as the primary construction material, said Mr Kri.

The bamboo toilet model from Arunachal Pradesh bagged the National Award for Toilet Technology in Difficult Terrain among 3,503 entries. A cash award of Rs 3,00,000 along with a plaque and a certificate were awarded to Mr Tiwari for bringing the concept of the bamboo toilet to Arunachal Pradesh and working together with the state government to popularise the concept. The amount was readily donated by Mr Tiwari to the state for its utilisation in the Swachh Bharat Abhiyan. The state government of Arunachal Pradesh has also agreed to share details of the bamboo toilet’s construction with neighbouring states in the north-east. Now that bamboo toilets have received their due recognition, their implementation across north-east India and other region with tough terrain should be the next step for government authorities.

Here’s Why People In Jamshedpur Are Taking Selfies With Dustbins