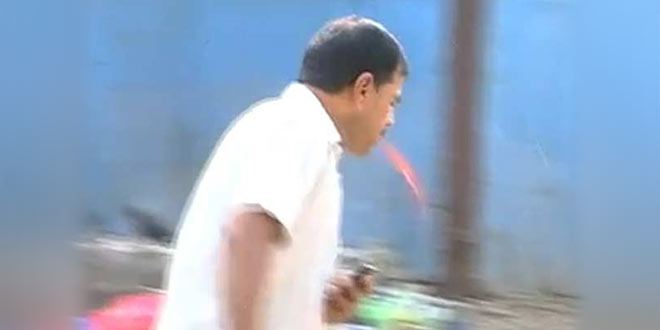 New Delhi: 36-year-old Ravi Shankar, a resident of Bibwewadi ward in Pune, was waiting to be picked up in his office bus, as was his habit, he had a paan (betel leaf) to kill time. As he was savouring the paan, Ravi casually spat the residue at the bus stop, before he boarded his bus. Suddenly, a group of 10 people who call themselves ‘Pune’s City Squad’ came charging towards him and asked Ravi to clean-up his mess before he boards the bus and pay a fine of Rs 150. They also warned Ravi not to repeat the offence of spitting ever gain and help keep the city spick and span. Apart from Ravi, 160 Puneites have been so far been caught in the act of spitting and asked to clean up by Pune Municipal Corporation (PMC) since November 2, when the Anti-Spitting campaign was introduced. Till now, the civic body has also collected a sum of Rs 18,000 in penalties. Talking to NDTV about this new Anti-Spitting campaign in Pune, Joint Commissioner, Solid Waste Management, Dnyaneshwar Molak said,

As a pilot project, we launched an anti-spitting initiative on November 2 in five wards of Pune – Bibwewadi, Aundh, Yerawada, Kasba and Ghole Road. The civic body formed 15 teams, each with 10 people, and the teams were directed to take rounds of the wards from 12pm to 2pm and punish those who are caught spitting on the roads of the city.

The government has instituted the following fines for the defaulters – Rs 150 for spitting, Rs 180 for littering, Rs 200 for open urination and Rs 500 for open defecation. We thought of sticking to the same fines but wanted to do something different in our Anti-Spitting campaign so that people do not repeat this offence. Spitting is like a habit, if only fines are collected from the people, their habits won’t get changed as it is not a hefty amount. That’s why we thought of introducing city squads and the concept of ‘clean your spit’ if found spitting.

The Objective Of Anti-Spitting Campaign

PMC’s objective behind the punishment is to send a clear message to Puneites that the civic body will not tolerate the offence of making the city dirty.

“If offenders are made to clean their own spit, they will feel ashamed, and from next time, they will think twice before spitting on the streets,” added Mr Molak.

Puneites Give PMC’s Anti-Spitting Campaign A Big Thumbs Up

Mr Molak says that people of Pune have given a thumbs up to the civic body for this new campaign. He added,

We also got a third party survey done to find out how effective the campaign is proving to be in the city, as people will know the real difference. The survey which we got conducted, covered all the five wards where the pilot project has been introduced and it found out that 90 per cent Puneites think that the anti-spitting campaign is making a difference.

In a bid to keep Pune streets clean, the city civic body has started punishing people spitting on roads by making them clean the spit, besides levying a fine on offenders.

A unique and wonderful move by Pune authorities Towards SWACH BHARAT. Any one caught spitting on road has not only got to pay fine but has to clean it. Many people are punished for spitting on road.
A lesson one shall never forget. pic.twitter.com/KRPVQIH7Ul

A great initiative starred by Pune Municipal Corporation.Wipe your dirt with your hand and pay fine if you are caught spitting.I hope Nagpur Municipal corporation will also come up with such initiatives to clean our city,in additional publish their photos in next day news papers

@PuneCityPolice Appreciate the efforts Pune Police is taking to clean the roads off from spitting! Cleanliness is next to Godliness will bear fruit soon hopefully. ???? #salute

Mr Molak also said that this time in Swachh Survekshan 2018 Pune bagged 10th position, in 2019 with more cleanliness oriented initiatives and campaigns like this one, Pune will aim for No.1 position.