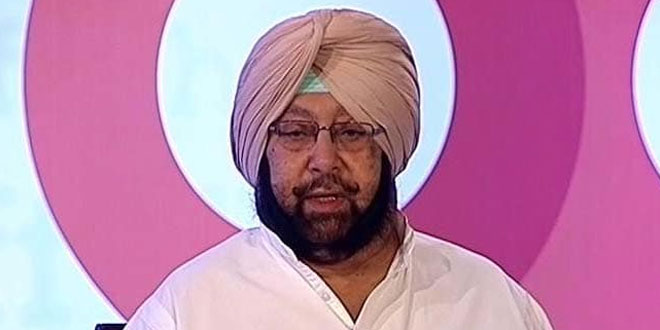 Chandigarh: Amid the spike in cases in the state, Punjab Chief Minister Captain Amarinder Singh on Wednesday ordered an increase in testing to 30,000 a day, with at least 10 people in the immediate circle of every positive patient to be tested. Reviewing the situation through video conference, with top health and medical experts and officials, the Chief Minister also directed the health department to supply ventilators to medical colleges and private hospitals free of cost.

He further asked the health department to provide manpower, such as anesthetists, to the hospitals that have witnessed an increase in COVID-19 patients in the wake of the cap on treatment rates by the government.

Chief Secretary Vini Mahajan, who was also present during the meeting, said that tenders had been floated for the procurement of nine more RT-PCR machines and the same was expected by next week.

She also stressed on increasing rapid antigen testing, as well as augmentation of level three bed capacity. Ms Vini added that to maintain continuity of COVID treatment and care in private hospitals, the anesthetists would need to be replaced with younger ones as most of the ones employed fall between the age of 55 to 60 years. The Chief Minister also agreed, saying “we have to take them on board and extend all help while being strict in the enforcement of the fee cap and other restrictions.”

Health, medical education, and research advisor of the Punjab government, Dr K K Talwar, in his presentation earlier, pointed out that the last three-four days had witnessed 300+ patients at Level 3, with 48 on ventilators, up from just 27 about 10 days ago.

Though deaths per million in Punjab, at 30.8, was lower than India’s 39.9, the situation was grim as 920 people had lost their lives to COVID and the state’s recovery rate at 62.9% was lower than the nation’s 73.9%. The percentage of co-morbid patients was higher in Punjab as compared with Haryana, explaining the greater number of deaths here, he said.

Secretary Health Hussain Lal, in his presentation, said while the number of tests had gone up to nearly 20,000, the positivity rate had come down slightly to 8.05% for the week from August 11 to August 18, as against 9.31% from August 3 to August 10.

Punjab Chief Minister Captain Amarinder Singh also ordered a series of emergency measures, including the extension of weekend lockdown with daily night curfew from 7 pm to 5 am in all the 167 cities/towns in the state from Friday. He has ordered a total ban on all gatherings except weddings and funerals across the state till August 31.

The Chief Minister directed Director-General of Police (DGP), Dinkar Gupta, to strictly enforce compliance of rules with regard to the number of persons allowed to attend weddings and funerals, and also to ensure the total ban on political gatherings till August 31, when the situation will be reviewed. He also asked the DGP to crack the whip on all political protests and gatherings, and asked his own party, Punjab Congress, leadership to enforce the ban strictly.

“Enough is enough,” said Captain Amarinder, adding that “we need to be tough without affecting the state’s economic activity.” Pointing to the 920 COVID deaths reported in the state so far, he said “each death pains me, and the projections for the coming weeks are grim.”

Government and private offices will work at 50 per cent capacity till the end of this month, as per the directives issued by the Chief Minister during a video conference meeting with top officials to review the COVID situation in the state, which is witnessing a massive increase in daily cases and an increase in deaths.

Punjab Chief Minister also directed the concerned officials to restrict public visitors in government officials and to encourage the use of the online grievance redressal system, which has been significantly strengthened by the state government to minimise in-person contact with hassle-free online engagement.

In the five worst-affected districts of Amritsar, Ludhiana, Jalandhar, Patiala and SAS Nagar (Mohali), restrictions on vehicular capacity have been imposed again, with buses and other public transport to operate with 50 per cent capacity and private four-wheelers not allowed to carry more than three passengers per vehicle.

The Chief Minister said the state was in a “health emergency” situation, necessitating harsh measures, which might have to be further intensified in the coming days to curb the COVID spread. Though the cases were currently concentrated mainly in urban areas, rural areas were also witnessing an increase, he said, adding that if needed, travel restrictions may have to be imposed.

Over 10 Lakh COVID-19 Tests Conducted In A Day In India: Health Ministry