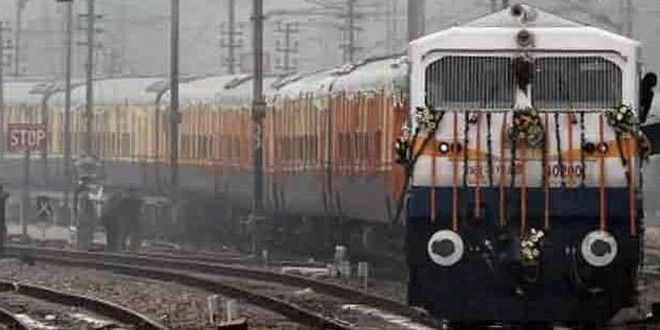 New Delhi: The Railways has delivered over 21,392 tonnes of liquid medical oxygen in more than 1,274 tankers to 15 states, the national transporter said Sunday amid the second wave of the COVID-19 pandemic. So far, 313 Oxygen Express trains have completed their journey while five loaded trains are on the run with more than 406 tonnes of liquid medical oxygen in 23 tankers. Liquid Medical Oxygen delivery to Haryana and Karnataka has crossed 2,000 tonnes each while Tamil Nadu and Telangana each have received over 1,800 tonnes of the life-saving gas. Oxygen Express trains started their deliveries on April 24 with Maharashtra receiving a load of 126 tonnes.

Till now, Oxygen Express trains offloaded liquid medical oxygen in 39 cities, including Lucknow, Varanasi, Kanpur, Bareilly, Gorakhpur and Agra in Uttar Pradesh, Sagar, Jabalpur, Katni and Bhopal in Madhya Pradesh, Nagpur, Nashik, Pune, Mumbai and Solapur in Maharashtra, Hyderabad in Telangana, and Faridabad and Gurgaon in Haryana. The Indian Railways has mapped different routes with oxygen supply locations and keeps itself ready with any emerging need of the states which provide tankers to the national transporter for bringing the life-saving gas amid the COVID-19 pandemic.

Crisscrossing the country, the Railways is picking up oxygen from places like Hapa, Baroda and Mundra in the west and Rourkela, Durgapur, Tatanagar, and Angul in the East and then delivering it to Uttarakhand, Karnataka, Maharashtra, Madhya Pradesh, Andhra Pradesh, Rajasthan, Tamil Nadu, Haryana, Telangana, Punjab, Kerala, Delhi, Uttar Pradesh and Assam in complex operational route planning scenarios.