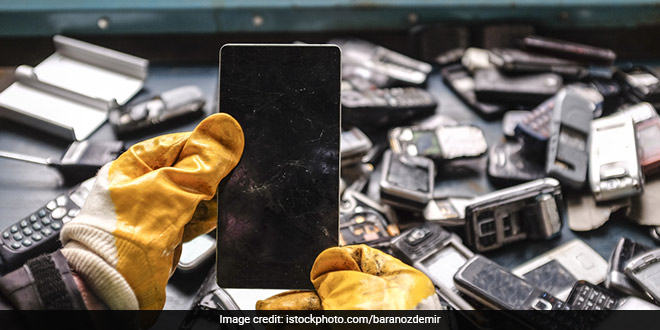 New Delhi: In a bid to curb increasing electronic-waste and make sure e-waste is reaching the recycling units for effective disposal, Rajasthan government has come out with a scheme in which the state government will buy outdated electronics items – computers, desktops, routers, basically any e-waste items that are lying unused, from the consumers. The scheme was officially launched by the government on the occasion of 45th World Environment Day on June 5 for which India was chosen as the host country. Speaking to NDTV about the initiative, a senior official from the Rajasthan State Pollution Control Board said,

The state is generating 20,000 tonnes of e-waste in a year – this is the scenario when we have 10 recycling units, each with a capacity of 68,670 tonnes. The problem is currently all these recycling units are under utilised. Another issue is that the common man doesn’t know about basic things like – how to manage e-waste, why it is necessary to send e-waste to recycling units and of course there is no system in place to take e-waste to these plants. To overcome all these barriers, we have decided to simply buy the e-waste from consumers and in return give them cash.

This is the big step the government has taken, we hope to reduce a load of e-waste considerably in the state.

The government along with the state pollution control board, Indian Oil, Instacash, and Greenspace, has started a campaign to create public awareness against e-waste and plastic so that a common man is made aware on about the importance of e-waste management.

This is the first time, any state government has taken a step like this for effective e-waste management. Currently, according to the recent report released by Assocham, India is among top 5 e-waste generating countries in the world, besides China, the US, Japan, and Germany. Among the states, Maharashtra contributes the largest e-waste, it generates 19% of the total waste generated in the country or 3.96 lakh tonnes a year, but recycles only 10.9% or 47,810 tonnes of waste, followed by Tamil Nadu that produces 13% of India’s e-waste and recycles 52,427 tonnes (10.9%) and Uttar Pradesh (10.1%) recycles 86,130 (19.7%).

The main reason for the increase in e-waste in India is that the companies and consumers don’t comply with E-Waste laws that have been formed by the government. Another reason is that, till date companies don’t have a collection system of e-waste in place, as a result, most of the times, the e-waste ends up going into the landfills.

Given the vast problem of e-waste in India, other e-waste generating states should learn from Rajasthan’s new move and come out with unique ways to curb the problem of increasing e-waste.