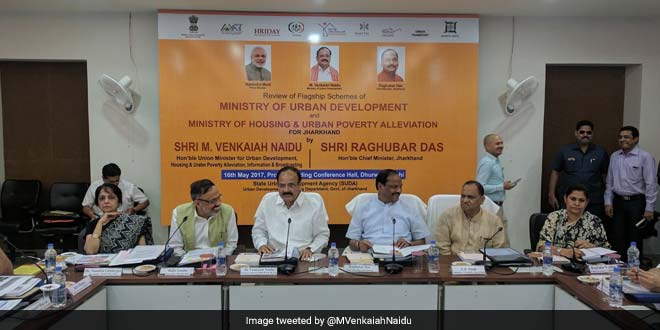 Ranchi: Union Urban Development and Housing Minister M Venkaiah Naidu in a review meeting on May 16 said Jharkhand’s capital, Ranchi is all set to turn open defecation free (ODF) this year on Mahatma Gandhi’s Jayanti on October 2. Mr. Naidu further said that six towns  in the state – Chaas, Mango, Bundu, Khunti, Lohardaga and Gumla are free from open defecation and rest of the cities are expected to become ODF on the same date.

In the field of waste management, Mr. Naidu advised the Jharkhand government to introduce a method to convert state’s waste into compost. Tenders for setting up integrated solid waste management projects have been finalised in four cities – Godda, Mihijam, Giridih and Pakur added Mr. Naidu. As for other cities, the tenders will be finalised by end of this year.

Throwing light on implementing waste segregation in the state, the Minister said that ‘Waste to Compost’ plants have already been set up in wards of Chas and Jamshedpur to carry out source segregation in all wards of Chas and Jamshedpur from June 5, World Environment Day.   Other cities will follow the suit once the processing facilities are in place, added Mr. Naidu.

Under the Swachh Bharat Mission, Jharkhand has been allocated Rs 259.2 crores out of which 68 per cent has already been utilised.

Cleaning Up Mumbai: Nearly ₹8 Crores Collected From Fines On Littering In 10 Months