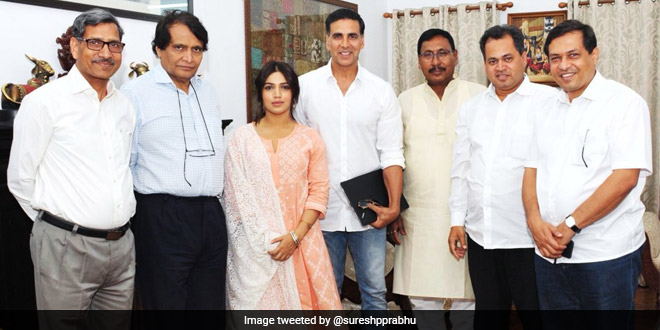 Akshay Kumar’s next release Toilet – Ek Prem Katha has been drawing attention for its Swachh Bharat Abhiyan theme. The movie that is slated for release in August, found a special mention from Railway Minister Suresh Prabhu. Mr. Prabhu appreciated the actor’s efforts to spread awareness on the importance of building toilets. The ‘Rustom’ actor had met Mr. Prabhu on May 16 to discuss about his upcoming movie’s plot.

The Railway Minister posted a picture on twitter expressing his pleasure on meeting the actor, “Pleasure meeting @akshaykumar, fine actor,wonderful human being. Appreciate his efforts to spread awareness abt #SwachhBharat through cinema.”

The film was recently appreciated by Prime Minister Narendra Modi for its unique love story which is on the lines of government’s flagship programme – Swachh Bharat Abhiyan.

Hinting at a possible association with the government for ‘Swachh Azadi’, the actor tweeted back, “Thank you so much for your kind words and time Sir. Looking forward to associating and making a difference #SwachchAzaadi.”

Thank you so much for your kind words and time Sir. Looking forward to associating and making a difference ???????? #SwachchAzaadi https://t.co/y8tDmCa0eM

At an event held earlier this month the actor shared a dialogue which emphasised on why it is important to build toilets, especially for women in India, “Agar biwi pass chahiye to ghar main sandaas (toilet) chahiye.”(If you want your wife to stay with you then build a toilet in your house.)

Apart from spreading the message in an entertaining way, the actor has also personally associated himself with the Swachh Bharat campaign. On the occasion of Maharashtra Day he gave some Swachh Ideas to Maharashtra Chief Minister Devendra Fadnavis. He proposed an idea of a toilet app that would help people detect the nearest toilet to them. He also suggested that male and female toilets be constructed at every 500 metres or a kilometre.

The movie is set to release on August 11 and stresses on the need to end open defecation by changing the mindset of the people with regards to the need for toilets.