Thank You Donors
Coronavirus Outbreak
Home
Features
Reduce, Reuse And Retune: That’s The Motto Of Montry Manuel, A Musician Spreading The Message Of Cleanliness Through Music

New Delhi: Montry Manuel, a Cochin-based percussionist’s mantra of life to ‘reduce, reuse and retune’ is on the lines of the Swachh Bharat Mission. He contributes towards a clean India by picking up garbage and giving it a new lease of life, as a musical instrument. He believes that there is no better way to spread the message of cleanliness than through music, and he has done this as part of his collaboration with the 150-days long Tera Mera Beach campaign in Goa. On the evening of March 4, the tourists and visitors taking a stroll on Goa’s sandy and sun-kissed Miramar beach were in for a musical treat as Mr. Manuel used drum sticks to make music out of plastic bottles filled with sand, old paint tins, PVC pipes, soda cans, aluminum sheets, a vacuum cleaner pipe and even polythene bags. His musical performance using instruments made from random waste material marked 100 days of the campaign, which started in mid-November 2017 to create mass awareness among people to keep the beaches clean.

Montry Manuel’s music left visitors clapping, foot-tapping and moving to the rhythmic beats produced on discarded metal jugs (named as Floating Jug by Mr Manuel), PVC pipes and a paint bucket. While they enjoyed the music, they also committed to the cause – not to litter on the beaches and help keep them clean.

Speaking to NDTV about his initiative to create music from recycled products, Mr. Manuel said:

We are the source of garbage and are littering it around. Only when we acknowledge this fact and become responsible, we will be able to reduce it and also reuse it for better purposes, like I am doing my bit by using it to create music. I am delighted that through my music I am able to make the people understand the importance of keeping not the beaches but also the environment clean. 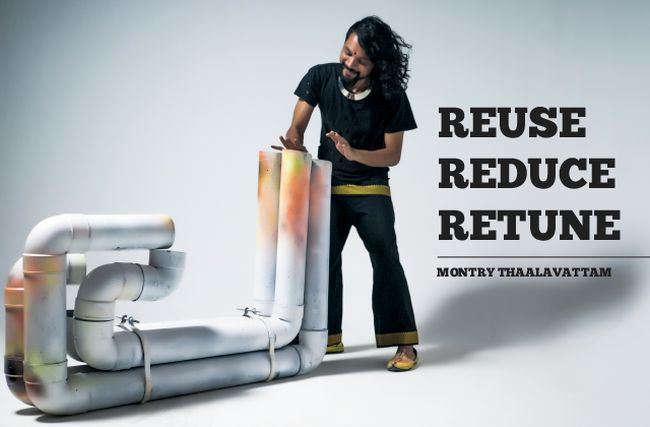 Mr. Manuel has been crafting customised instruments out of waste materials from the past 15 years. “I’ve always been interested in experimenting and creating new sounds, so I started to ideate in creating music from upcycled products,” said Mr Manuel. He launched his work officially in 2009 with the project named Thaalavattam, which means ‘A Circle of Rhythm’, a unique percussion-project that harnesses the universal power of music to inspire people to reduce and reuse.

As part of this project, Mr. Manuel has created around 40 instruments. While performing, he mixes the sound of these instruments with electronic music. His advice to people who discard trash is: “if we take care of our mother earth, she will always take care of us and our future generations to come.”

Speaking about the Tera Mera Beach campaign, this was launched by Drishti Marin, an agency which provides lifeguard services, with an aim to make people responsible and aware of the necessity to segregate waste and use bins when they visit the beaches. The campaign, supported by Goa Tourism, consist of daily drum circles lead by musicians from Taal Inc., musical performances and community art installations made from bottles, cans, papers, cloth among other things collected by the participants during the clean-up drives at the beaches.

We are delighted to complete a 100 successful days of the Tera Mera Beach campaign to create awareness on beach clean-up and teach people about the importance of waste segregation, said Ravi Shankar, CEO, Drishti Marine.

In 2016, the state government actually reached out to Drishti Marine and asked them to assist with garbage collection along the beaches on a temporary basis to support the efforts of the government. Drishti Marine, entrusted with the job of collecting waste across 40 of Goa’s beaches, has around 330 workers collecting wet waste each day and dry waste once every three days from the 400-odd beach shacks.

The study, led by senior scientist Dr Mahua Saha, indicated presence of microplastics in water, sediment and biota (local animal and plant life) from the Sal Estuary in Goa

Delta Plus Variant Of COVID-19 Is Not Yet ‘Variant Of Concern’, Nullifies Monoclonal Antibody Use: Government

No Link Between Genetic Risk Factor And Severe COVID Among South Asians: Study