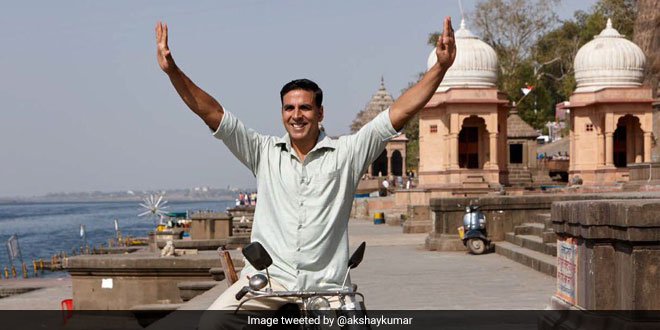 New Delhi: ‘Only 18 percent of Indian women use sanitary napkins versus 82 percent who use unhygienic means,’ states Actor Akshay Kumar announcing the launch of a new campaign for Menstrual Hygiene – #18to82 with an aim to bridge the gap between sanitary napkin users from 18 per cent to 82 per cent in India. The campaign is a part of a social movement – Niine that has been conceived by social entrepreneur Amar Tulsiyan with a hope to empower women, raise awareness about menstrual hygiene and tackle the taboos associated with menstruation in the country.

Supporting this initiative, the actor urged people to do the same, he added,

I support the @Niinemovement which breaks the taboos & encourages conversations on periods.

ONLY 18% of Indian women use sanitary napkins vs 82% who use unhygienic means.

I support the @Niinemovement which breaks the taboos & encourages conversations on periods.

Help bridge the gap from #18to82, register on https://t.co/qFjGx0UhEc pic.twitter.com/VODzm425Kv

In an official statement, Akshay Kumar has said,

Open and unafraid conversations on menstruation are powerful as they help to breakdown taboos. Menstrual hygiene is an urgent issue that we must resolve in India.

Together, we can ensure that every female has the right to manage her period safely and with dignity, and the Niine Movement can drive this social revolution. The empowerment of women is the empowerment of a nation.

Sharing the details of the campaign, Amar Tulsiyan said,

I hope this movement becomes the spark that leads the way in bringing menstrual hygiene and dignity to every woman and girl in India.

The Niine movement will be officially launched on May 28, the Menstrual Hygiene Awareness Day.

This is not the first time, the actor has lent support for the menstrual hygiene cause. Earlier, Akshay Kumar collaborated for a video- #AbSamjhautaNahin – The Shopping List that stressed on providing low-cost sanitary napkins to underprivileged women.

Placed a sanitary pad vending machine at Mumbai Central ST Bus Depot today, hoping to place more across the State and eventually hopefully the whole country. Thank you @AUThackeray for your support ???????? pic.twitter.com/MghqrEEK9Q

Ganga Pollution: Perception That ‘Nothing Significant’ Being Done To Clean Ganga Is Not Correct, 80% Ganga To Be Clean By March 2019, Says Nitin Gadkari