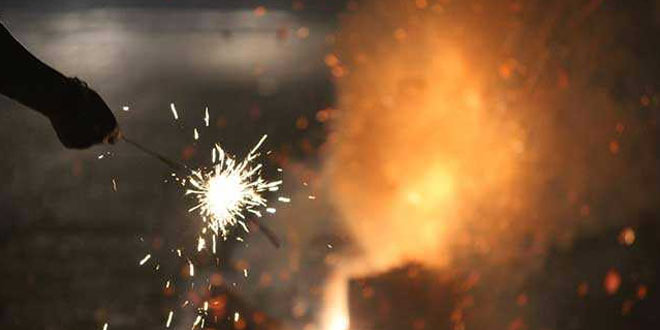 Three infants, Arjun Gopal, Aarav Bhandari and Zoya Rao Bhasin, aged between six to 14 months had filed a writ petition at the Supreme Court in 2015 citing poor air quality causing severe air pollution, and asking for a ban on sale of firecrackers. The plea was supported by the Central Pollution Control Board (CPCB). Air pollution in Delhi was a matter of national concern last year, when the period during and right after Diwali witnessed severe deterioration of the air quality. Many parts of the Delhi-NCR region were under smog several days post Diwali festivities, with the level of particulate matter 2.5, an air pollutant, reaching 955 mg/m³, over 16 times the permissible limit.

The temporary ban on the sale of firecrackers was briefly lifted by the Supreme Court in September this year, as the Court said that a total ban would be an extreme step and a more graded approach was required to ensure that air pollution in the region is curbed. However, as Diwali approached, fears of repetition of last year’s smog, along with the gradual onset of winter, threatened deterioration in Delhi’s air quality.

Firecrackers are an economically significant industry in India, with an annual turnover of over Rs 7,000 crore all over India. Nearly 3,00,000 people are directly employed in the manufacturing of firecrackers in the country, while another 5,00,000 are employed in packaging, printing and other related fields. The decision of the Supreme Court is likely to affect many shopkeepers in the Delhi-NCR region who had already setup stalls to sell firecrackers.

Sales from Delhi-NCR amount to nearly Rs 1,000 crore during the Diwali period. The court order will affect the sales badly as it comes right before Diwali. If other states also decide to ban the sale of firecrackers following the court order, it will have a severe effect on the profits we make during the festive season, said Asai Thambi, President, Tamil Nadu Fireworks and Amorces Manufacturers Association.

Delhi’s air quality, said to be one of the worst in the world, has been compared to Beijing, one of the most heavily polluted cities in the world. In 2014, Delhi’s air quality outranked Beijing, as per a World Health Organization (WHO) report which monitored air quality in some of the world’s premier cities. Up to 30,000 deaths due to air pollution are caused in Delhi alone every year, a 2015 report from the Centre for Science and Environment cited.

This is a bold decision on behalf of the Supreme Court, as it will ensure that air pollution levels during Diwali are not worsened. Last year, the smoke from crackers had choked the city for many days even after Delhi. Though there are several other reasons for Delhi’s air pollution, the ban on sale of crackers is a strong start in ensuring that last year’s mess is not repeated, said Ashish Jain, Director, Indian Pollution Control Association.

With a slight dip in temperature, Delhi is currently witnessing low humidity. Dry winds from the north carrying dust are contributors to Delhi’s already poor air quality. Crop burning from the adjacent states of Punjab and Haryana also contribute to Delhi’s air pollution, as soot flows in from those states to Delhi, affecting the city’s air quality. A National Green Tribunal (NGT) order in 2015, banning crop burning in Punjab and Haryana has failed to check the practice.

With Delhi Deputy Chief Minister Manish Sisodia promising to bring back the odd-even scheme if the city’s air quality worsens and the Supreme Court ruling banning sale of firecrackers, there seems to be some hope in stemming the deterioration of air quality Delhiites are used to at the onset of winter. Emissions from vehicles and burning of waste however, remain continuing concerns. The Supreme Court verdict however, is an optimistic start at ensuring better air quality for the Delhi-NCR region amidst a pollution free Diwali.