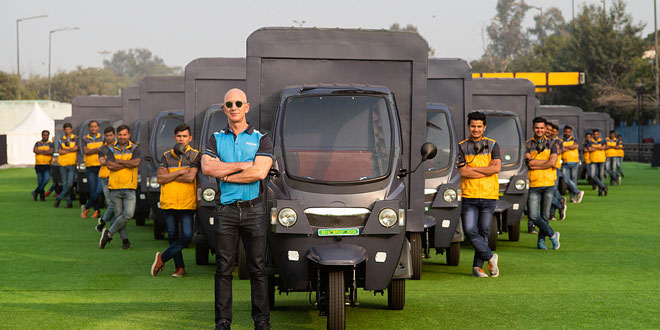 New Delhi: India is globally infamous for its hazardous and ever deteriorating pollution levels. 15 out of the top 20 polluted cities in the world are in India, as revealed by the 2019 Greenpeace study. With an aim to reduce their carbon footprint in the growing pollution levels in the country, Amazon India has committed to deploy 10,000 electric vehicles (EVs) in its delivery fleet by 2025. The move comes as part of the company’s global Climate Pledge, as announced in September last year. A spokesperson form Amazon India explained the initiative to NDTV, she said,

These EVs are in addition to the global commitment of 100,000 electric vehicles in the delivery fleet by 2030 announced in the Climate Pledge signed by Amazon. In 2020, these vehicles will operate in over 20 cities of India – Delhi NCR, Bangalore, Hyderabad, Ahmedabad, Pune, Nagpur and Coimbatore to name a few, and this number will continue to grow and scale in the coming years.

She further explained that these 20 cities include Delhi NCR, Bangalore, Hyderabad, Ahmedabad, Pune, Nagpur and Coimbatore to name a few.
Amazon CEO Jeff Bezos on Monday (January 20) announced via a tweet that the company has started to roll out its fleet of electric delivery rickshaws in India. The tweet also contains a video of Mr. Bezos riding one of the electric rickshaws.

The expansion of our electric vehicle fleet to 10,000 vehicles by 2025 is an integral milestone in our journey to become an energy efficient leader in the industry, he said.

The Amazon India spokesperson said that the Government’s focus to encourage electric vehicle adoption by issuing policies such as Faster Adoption and Manufacturing of Hybrid and Electric Vehicles in India (FAME) will aid in propelling Amazon’s EV vision in the country. She further told NDTV,

We ran pilots across different cities in 2019; learnings from which have helped create scalable and long term EV variants to build this large fleet.

The fleet of 10,000 EVs will include three-wheelers as well as four-wheelers, designed and manufactured in India, even as the company is working with several Indian manufacturers to build the electric fleet.

Significant progress in the Indian e-mobility industry in the last few years has led to advanced technology, and superior motor and battery components, she said.

Back in September 2019, the company announced its plan to eliminate single-use plastic in its packaging from Amazon India’s Fulfilment Centres by June 2020.

We are well on target to achieve this milestone by June 2020. Amazon India has also invested in energy conservation and solar power generation in its fulfilment and sort centres, with advanced building energy management systems, and water conservation methods to make operations more sustainable, the spokesperson told NDTV.

According to her, the company was the first signatory of the Climate Pledge, promising to groom the e-retailer to be zero carbon by 2040 across its businesses, almost 10 years ahead of Paris Accord’s 2050 goal. Building 10,000 electric delivery vehicles fleet by 2022 and one lakh such vehicles by 2030; saving four million metric tons of carbon per year by 2030 is part of Amazon’s Climate Pledge.

The initiative from Amazon India comes just days after tech giant, Microsoft Corporation on January 16 announced their aim to “set a new ambition among Fortune 500 companies in addressing climate change, pledging to remove as much carbon as it has emitted in its 45-year history.” Microsoft’s plan includes the creation of a “Climate Innovation Fund,” which will invest $1 billion over the next four years to speed up the development of carbon removal technology.