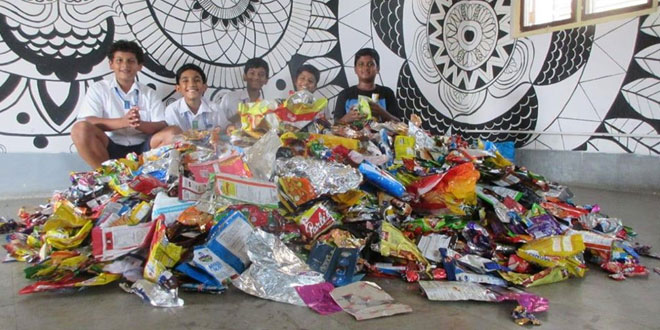 New Delhi: With a mission to reduce the plastic waste reaching landfills and the damage caused by plastic wrappers and packaging material, a Mumbai based NGO Mumbai Sustainablity Centre (MSC) has been running ‘Safai Bank of India’ (SBI). The initiative which was started in 2018 has now expanded to various other parts of the country including Delhi and National Capital Region. Rishi Agarwal, an environmentalist in Mumbai who founded MSC and started SBI said that through Safai Bank millions of plastic wrappers can be diverted from reaching city’s dumping grounds and landfills.

While talking about the idea behind starting a bank to manage plastic waste, Mr. Agarwal told NDTV,

I have a long association with the subject of waste management. Right after I finished college, I started working on environmental issues like saving the mangrove forest in Mumbai, waste segregation, and air pollution among other issues. As part of my work, I used to visit landfills and dumping yard frequently. After looking at the waste crisis facing our cities, plastic waste and waste management became core areas of my focus. I believe that waste management is the easiest thing that can be done to save the environment from the adverse impacts of the growing waste on the planet. It just needs a little effort and will. To tackle the issue of waste and plastic, I started ‘Safai Bank of India’ in 2018.

‘Don’t Bin It, Bank It’- Motto Of The Safai Bank Of India

Explaining the working of SBI, Mr. Agarwal highlighted that the initiative entails collection points at school, colleges, commercial complexes and residential areas. People can deposit plastic wrappers at these collection points. Any individual or school or commercial entity, who is committed towards a clean India, can become an account holder at SBI and operate a collection point at their home or any other space. One can even opt to open a new branch or become a coordinator at Safai Bank. SBI currently has 185 branches across the country, 413 account holders and 160 bank coordinators. From all the branches, SBI has been able to collect more than 22 lakh (22,09,222) wrappers and packets.

Most consumer goods are wrapped in multi-layered plastic which cannot be recycled and so it is sent to cement companies that burn these wrappers in the cement kiln in a controlled environment at a temperature more than 1500 degrees celsius. Through this method, no air pollution is produced because at such high temperature, the plastic loses its hydrocarbons and other impurities leaving no residues behind.

He further asserted that at dumping ground, when the wrappers get mixed with other types of waste and burnt, the temperature is much lower and so produces harmful gases like dioxins which not only pollute the environment but also cause hormonal imbalance in humans and cancer. 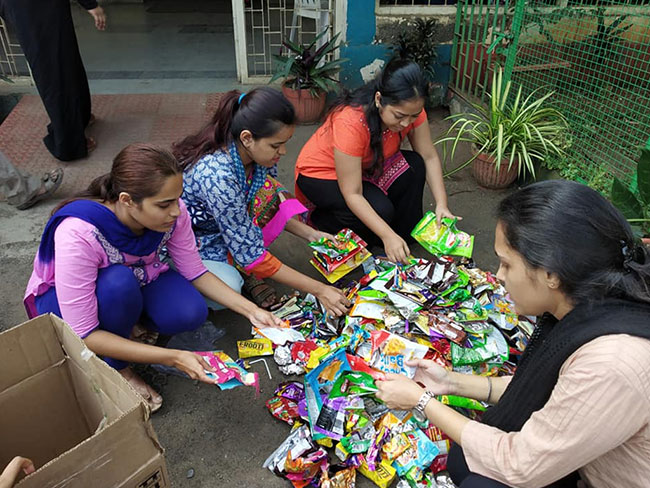 Mr. Agarwal highlighted that while SBI takes the deposits of plastic wrappers, it does not give the depositor anything in return except the satisfaction of disposing of the plastic waste responsibly. He said,

Being an environmentalist group, our aim is to encourage people to reduce the consumption of plastic wrappers. So we decided not to keep any rewards for depositing the plastic wrappers because it may lead to an increase in consumption. We also do not charge anything for our services. We receive support from recycling companies and CSR (Corporate Social Responsibility) project of JSW Steel Limited (earlier known as Jindal South West) that is also running a very successful SBI branch on its campus and has collected over two lakh wrappers from its network of employees and customers.

Safai Bank of India is currently collecting only plastic wrappers that are made from multi-layered plastic (MLP) which is one of the largest types of plastic waste being generated with poor disposal procedures. Mr. AgarwaL highlighted that the maximum amount of waste at any landfill is that of MLP wrappers and by targeting these, a huge burden from the landfills can be taken off. He said,

While items like plastic bottles can be recycled, these MLP packets are non-recyclable, due to which even the rag pickers leave these.

Multi-layered plastics are made up of one or more layers of plastics with a thin layer of aluminium laminated in between paper of plastic layers. A study conducted by Global Alliance for Incinerator Alternatives (GAIA) in May 2018 cited that Multilayered Plastic (MLP) accounted for 48 per cent of all plastic waste in India. Commonly used in the packaging of chips, biscuits, chocolates, mouth-fresheners, and tobacco, MLP is non-recyclable and has no alternate use, according to the Ministry of Environment, Forest and Climate Change (MoEFCC). Therefore, in March 2018, MoEFCC notified an amendment in the Plastic Waste Management (Amendment) Rules 2018, adding MLP to the list of plastics that it expects to be phased out but no deadline has been set for this.

Also Read: These Young Students From Gurugram Saved 14,000 Plastic Wrappers From Ending Up In Landfills, Here’s How

Inspired by the idea of keeping MLPs from reaching dumping yards and becoming an environmental hazard, Suhani Ravi Tewari, a 12-year-old resident of Gurugram started offering a muffin to anyone who brings to her five MLP wrappers. While talking to NDTV she said,

My school, Heritage Xperiential Learning School, Gurugram, is an account holder at SBI and at school we have been taught about the hazards of MLP, its alternatives and ways to reduce it. During my summer break, last year, I decided to help my school by creating awareness about the harmful effects of MLPs among my family members, friends and other residents of my colony. 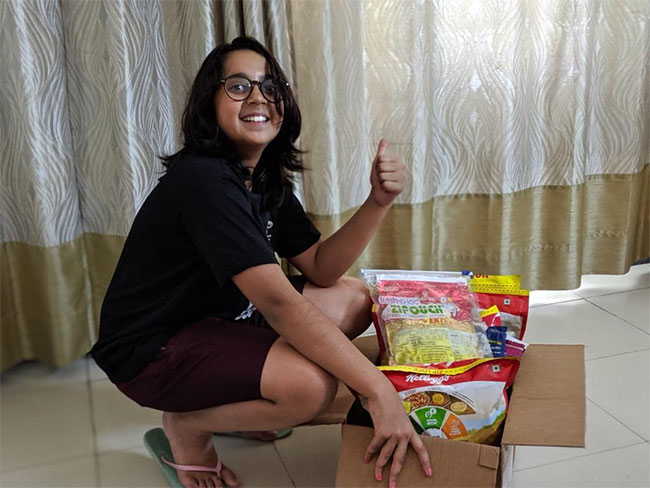 Till now, Suhani has collected more than 15,000 wrappers which have been deposited with Safai Bank through her school

Suhani decided that each person who brings MLP wrappers to her gets a muffin baked by her as a thank you gesture. She also spoke to people in her society about reducing the use of MLP and its effective disposal. In the first week of her campaign, she managed to collect around 500 wrappers.
She receives support from her family and friends who have also helped her reach out to more people by spreading the word about her initiative on social media. She said,

I have visited Bandhwari landfill and was shocked at its state. Seeing the landfill made me realise how desperately we needed to work on this issue which is why I decided to continue the initiative even after my summer break got over.

Till now, she has collected more than 15,000 wrappers which have been deposited with Safai Bank through her school.

While currently, Safai bank is only focusing on eliminating MLPs, Mr. Agarwal said that they are working towards expanding the scope of SBI to tetra packs also for which they have started pilot projects at some places. However, he clarified that SBI will not be attempting to collect other plastic items because other kinds of plastic have monetary value and can be sold in the market which is a source of livelihood many who are engaged in rag picking. The people associated with Safai banks also advocate for ‘extended producer responsibility’ under which the companies producing the products have to take the responsibility for the collection and treatment or disposal of the waste generated after the consumption of the product like packaging or used/discarded product.