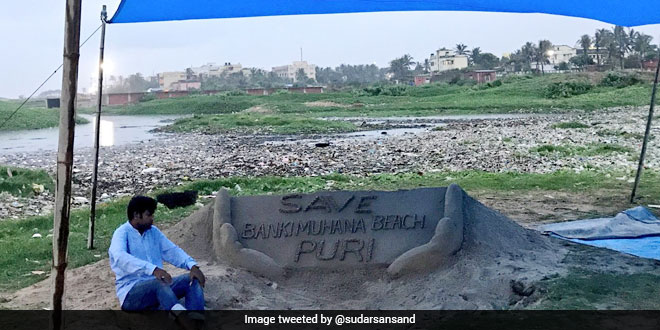 New Delhi: 5 days after internationally renowned sand artist and Padma Shri awardee, Sudarsan Pattnaik ended his hunger strike against beach pollution in Puri, he appealed to Prime Minister Narendra Modi to set up waste water treatment plants along the country’s coastlines. In a post on twitter, Mr Pattnaik said, “Hon’@PMOIndia @narendramodi sir, In most of the coastlines of our country, the drainage water goes directly to the sea. My humble appeal to establish waste water treatment plants in such places. #SaveOurOceans #Saveourbeaches.” The artist has also penned down a letter with the same appeal.

Mr Pattnaik said that there is an urgent need to install treatment plants as most of waste and sewage water from households is directly discharged into the beaches and sea water thereby polluting the water bodies. He further added that the state government will soon set up a sewage treatment plant at the beach.

Alarmed by the volume of garbage littered at the Banki Muhana beach, sand artist sat on a dharna to protest against it through his art on July 11.

I am protesting (sitting on dharana) through my art against beach pollution at Bankimuhan, #Puri . pic.twitter.com/onKO6bN6BR

After 2 days of dharna, Mr Pattnaik was hospitalised as his condition deteriorated. On the fifth day he called off the strike after Odisha government conducted a massive cleanliness drive on the beach and passed a tender for a treatment plant, “I am Ending my Dharana as the authority have taken steps for cleaning & float the tender for treatment plant at #BankiMuhan beach #puri, (sic) ” he tweeted. He also appealed to the citizens to not discharge their trash into the drains.

I am Ending my Dharana as the authority have taken steps for cleaning & float the tender for treatment plant at #BankiMuhan beach #puri pic.twitter.com/eSmSO1ubSp

Mr Pattnaik said that he is happy that the five-day dharna staged by him against pollution at Banki Muhana beach in Puri yielded positive results.