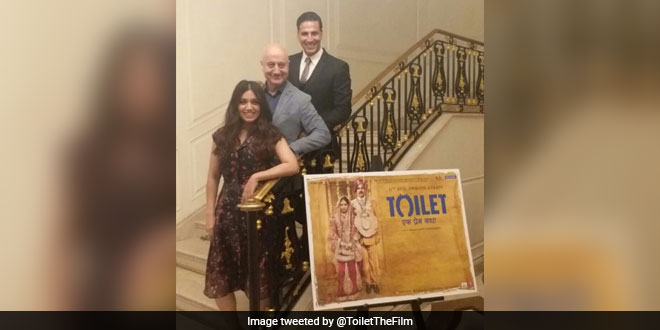 New Delhi: “I felt extremely awkward when I had to enact a scene of defecating in open in front of so many people. I cannot imagine what women who do not have an option but to relieve themselves in the open must be going through,” said actress Bhumi Pednekar when asked which was the toughest scene in Toilet- Ek Prem Katha. Actors Anupam Kher, Akshay Kumar and Bhumi Pednekar promoted the movie’s message today at an international press event in London.

Before attending the London press conference, Anupam Kher, Akshay Kumar and Bhumi Pednekar rode through the popular streets of London where they had a little Q&A session with the netizens. Replying to one of the questions put forward, the actors spoke about the social message the movie aims to promote. Adding that by citing toilet as an important criteria for marriage, the lead actors gave out a strong message, “Before asking about the boy’s education, job, etc., a girl’s family must ask if there is a toilet at home. Toilet na ho toh bya mat karna (Don’t marry if there is no toilet),” said Bhumi.

Toilet- Ek Prem Katha is an unusual love story and it revolves around the problems that arises between Keshav (played by Akshay) and Jaya (played by Bhumi) after they get married. The morning after their marriage, Jaya gets introduced to the ‘lota gang’ by the women of her house and finds out that Keshav’s house has no toilet. Soon she leaves the house and takes an oath of not returning until a toilet is constructed in the house. Inorder to get back the love of his life, Keshav launches a battle against open defecation in his village.

Akshay Kumar, who has quite a few patriotic and socially relevant movies under his belt, revealed how he stopped the practice of open defecation on Juhu beach in real life, “I used to see a lot of men urinating in open on the beach from my house. To end it I personally used to go down and aggressively scold the men and a few days later it stopped.”

Also Read: A Toilet Is A Necessity, It Is Everyone’s Birthright To Have One: Bhumi Pednekar, Actor of Toilet – Ek Prem Katha

The release date of the movie (August 11) has been deliberately chosen to be in the same week as Independence Day. Co-producer, Neeraj Pandey said, “We want to spread the message to as many people as possible.” Calling it a symbolic release, Anupam Kher said, “Let this Independence Day bring freedom to women. We hope that women become independent from defecating in open.”

Makers of the movie believe that it will bring a ‘Toilet Revolution’ in India, “Bollywood movies have always been a medium to inform people about the dark realities of our society. We want to leave an impression in the society and want people to talk about it and bring some change,” said Mr Pandey.

Echoing government’s prime focus towards bringing about a behavourial change towards toilet usage, Akshay Kumar said that the attitude of people is the main reason why open defecation is still prevalent in many parts of India, “It’s not about lack of infrastructure, the real problem is the toilet usage. People believe that freedom lies in going outside… where you cook food and sleep, you cannot defecate there. Caste system of India is also a problem. We have tried to address all these problems through the movie.”

The movie which promotes women’s safety and ensuring basic dignity for them, has received immense appreciation from many, including Prime Minister Narendra Modi and Union Railway Minister Suresh Prabhu.