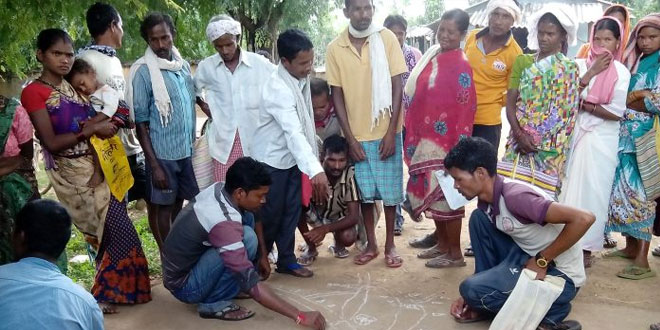 In Chhattisgarh’s Narayanpur district, the village of Orchha is a changed place today. Comprising a population of little more than 3,000 and 1,000 households, even a year back no more than 50-60 of them had toilets. The dismal sanitation coverage in the village was problematic, but what was even more concerning for the villagers was the frequent health issues they had to encounter. Several women from the village especially, had to be frequently taken to the Narayanpur district hospital for diarrhoea and other similar ailments. Today, it is a very different story. The village is open defecation free (ODF) as all the households have toilets. And with the ODF status, the health issues have drastically come down in the village.

Health and sanitation have been plaguing India for long, and are closely interrelated. The lack of toilets, which resulted in open defecation becoming a widespread practice in India, is also the cause of a range of health issues. The Ministry of Health and Family Welfare estimates that 13 children die every hour in India due to diarrhoea. Frequent diarrhoea can cause malnutrition in children, and 48 per cent of India’s children suffer from malnutrition, as estimated by UNICEF. Orchha in Narayanpur was at the receiving end of such health issues for years. For women especially, the problems of muscle dysfunction, constipation, impacted bowels was common because unlike men, women would have to wait to relieve themselves due to lack of toilets. In absence of toilets, women had to go to the nearby forests or fields in groups, that too either early in the morning or post sunset. So delayed defecation led to more health issues in women than men.

The women in Orchha, and in many of Narayanpur’s other villages had to suffer from lack of sanitation facilities, as well as numerous ailments which were a direct result of unhealthy sanitation habits. When we started conducting village visits in 2016, we encountered several women with health issues which were a direct result of them not having toilets at home. Lack of toilets and continuous health problems were the issues we wanted to eradicate from Orchha, said Amit Bhatia, CEO Zilla Panchayat, Orchha.

The district administration had implemented similar ODF drives in some other villages in the district, namely Bondum, Dhobe, Chihukapal and a few others. For Orchha, the challenges lay in working in a village which has been affected by left-wing extremism for many years. Also, the inhabitants of the village are mostly tribal people belonging primitive tribal groups, speaking the languages of Gondi, Halbi and Madiya. Communication with the villagers was problematic for the administration as language seemed to be a barrier. The geographical challenges were also enormous, as the habitations in the villages are spread over large forest areas and do not live in small clusters. Therefore for toilets to be constructed, masons had to travel long distances to conduct pre-construction surveys and then engage in the construction process.

The challenges in Orchha were numerous, as unlike any other village, the masons could not work for long hours due to the region being a high risk zone. The interior areas are hilly in nature, hence the construction process was not as easy or speedy when compared to constructing a toilet in the plains, said Mr. Bhatia.

To address the challenges faced, the administration held several meetings with all the concerned officials in the district regularly, from January to February 2017. The panchayat officials were given the responsibility to conduct Swachhta rallies in the village, which involved going from door-to-door and explaining how toilets were necessary to reduce the health problems in the village, especially that of women. Self-help groups from neighbouring villages were asked to assist district officials in convincing the villagers for the need of toilets. The SHGs and the officials repeatedly stressed on the fact that having toilets at home also addressed health problems such as diarrhoea, therefore reducing the numerous health problems that the villagers faced regularly. 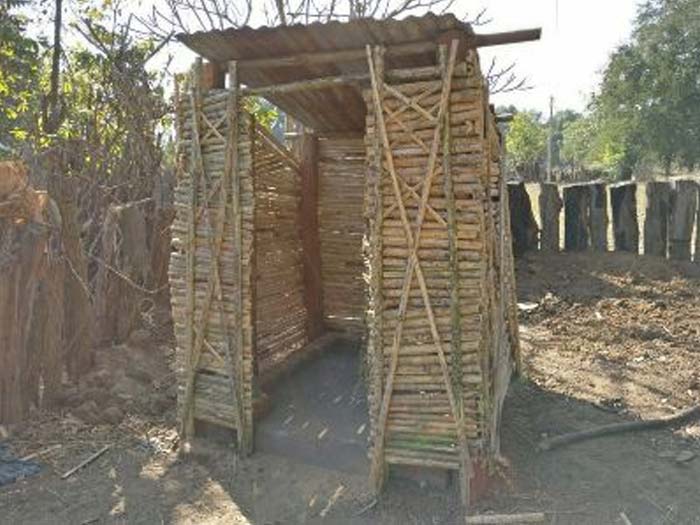 Toilets of bamboo structures were also constructed at some households

We wanted to show the linkage between sanitation and health because of their interrelation. For a village that has faced numerous health problems because of lack of toilets, it was important to make them understand that building toilets would help lessen health problems in the village. Since the bigger concern of health was simultaneously being addressed, it helped address both the issues of health and sanitation, said Mr. Bhatia.

The village was declared ODF in April 2017. It was a good move on the district administration’s part to link sanitation with health and utilise the necessity of toilets as important to ease the health related burdens of the villagers. Orchha also sets a healthy example for other district administrations in the country working on the Swachh Bharat Abhiyan. Highlighting the relationship between health and sanitation could be the key towards convincing more people to build toilets and engage in a healthy sanitary life.

In April 2017, Prime Minister Narendra Modi had said that the Swachh Bharat Abhiyan was also aimed at ensuring preventive healthcare in India. Living in unclean conditions can result in contracting several diseases, many of which can turn out to be fatal. Children are especially vulnerable to it, as lack of toilets, soaps and clean drinking water result to over 1.8 lakh diarrhoeal deaths in India every year.

Throughout the Swachh Bharat Abhiyan, we have said that the mission is as much about health as it is about cleanliness. The building of functional toilets can eradicate numerous health problems from India. The sooner people realise the relationship between the two, the easier it’ll become to tackle the issues of health and sanitation with the building of functional toilets, said Lav Agarwal, Joint Secretary, Ministry of Health and Family Welfare.

Three years into the Abhiyan has seen mixed successes, with India’s sanitation coverage increasing to 64.18 per cent. Globally, between 2005 to 2015, diarrhoeal deaths came down by 34 per cent, but no numbers related to decrease or increase of number of deaths in India are available yet. For the Abhiyan to see further success, emphasising on the health aspect of sanitation for the next two years could see further success, especially in villages like Orchha with challenges galore.