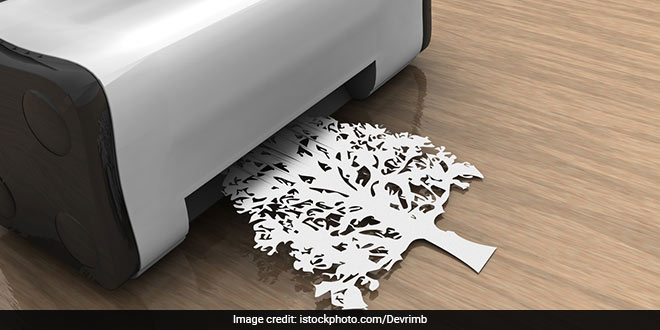 New Delhi: A plea has been filed in the Supreme Court by a think tank to seek a direction to the apex court Registry to insist on using both sides of the pages while filing documents like petitions, pleadings, counters, rejoinders and annexures.

Seeking a re-visit to the Registry’s past order that all filings in the top court would be on one side of the paper in double-spaced typing and wide margins, the Centre for Accountability and Systemic Research (CASR) said that doing away with this practice will help save a lot of paper and thus contribute to environmental protection.

CASR counsel Virag Gupta said that when the top court was doing so much for environmental protection and issuing directions to different agencies, why can’t a beginning be made by it (top court) to reduce consumption of paper whose manufacture involves the use of a huge quantity of water and cutting of trees.

The petitioner sought directions that when petitions are filed, the Registry should seek just one copy to cure defects, and only then should more copies of the final petition be filed.

It requires 10 litres of water to make one A4-size paper and a tree on an average yields about 8,433 sheets, the petitioner claimed.

Pointing out that Indian courts are one of the biggest users of paper despite e-filing prevalent in some courts, the CASR said: “At the national level, 13,91,426 and 113,012 new cases were filed in subordinate courts and High Courts in the last one month alone.”

Coming to the Supreme Court, the think tank said that 61,520 matters/cases were instituted between October 2016 and September 2017.

If both sides of the paper were used while filing fresh cases, CASR said, it would have saved about 2,953 trees in one year alone, apart from 24.6 crore litres of water.