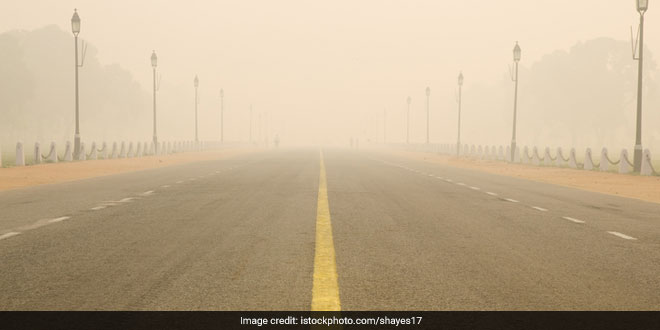 New Delhi: The Central Pollution Control Board’s (CPCB) on December 25 formulated a plan to use LiDAR (Light Detection and Ranging) devices to monitor Delhi’s air quality as it worsened over the weekend of December 23 to 25.  The laser beams projected in the sky would enable the CPCB to determine the composition of pollutants worsening the capital’s air quality. The plan has however, hit a financial roadblock as air quality remained poor in the national capital, recording a very poor 372 on Christmas day.

In 2016, CPCB had drawn up plans to set up five LiDAR equipment across the capital but the plan never materialised due to crunch of funds. Despite air pollution making a strong comeback this year, the plan to install LiDAR equipment remains on paper, as CPCB cites that monetary constraints has delayed the plan. Each LiDAR device costs between Rs 60 and 70 lakh, bringing the total cost to more than Rs 3 crore.

LIDAR projects laser beams towards the sky. Subsequently, the interplay of light with the objects falling on its path through absorption, reflection, scattering help determine the composition of particulates by studying the wavelengths, said a CPCB official.

On installation, the LiDAR devices will help determine the trajectory of pollutants present in the air layers. Conventional surface-level monitoring may not always be able to monitor what types of pollutants are present in the air. As per CPCB, LiDAR technology will make it much easier to pinpoint the source of a particular pollutant and authorities can then begin work to keep it under control.

Nepal has a facility of vertical air monitoring facility, aided by United Nations, which studies the nature of air pollutants. India had seven stations along its eastern and western borders under a similar project, an offshoot of the Male declaration on Control and Prevention of Air Pollution and its likely Transboundary Effects for South Asia. But fund crunch has forced India to abandon the project and it is highly unlikely that the LiDAR technology is going to see light of the day anytime soon. CPCB has an annual budget of Rs 40 crore, which covers the body’s total cost of conducting pollution based studies and programmes and installation of LiDAR equipment within that budget will be impossible for CPCB to sustain.

In such a situation, it would not be fair to expect comprehensive pollution data. We need to put in place a diverse monitoring network and that requires money. And CPCB with an annual budget of around Rs 40 crore for air pollution monitoring is not in a position to deliver, said the CPCB official.

Apart from construction and road dust, airborne particles from salt mines in Afghanistan are also pushing up pollution levels in the capital, as found out by a team of CPCB scientists. Air pollution has been a bother for Delhi post Diwali in October and the capital is yet to recover from the continuous bouts of poor air quality. Though several methods have been discussed by both state and Central administrations to curb air pollution, including bringing back the Odd-Even scheme, nothing concrete could come out of the discussions, leaving Delhi in the lurch of air pollution.