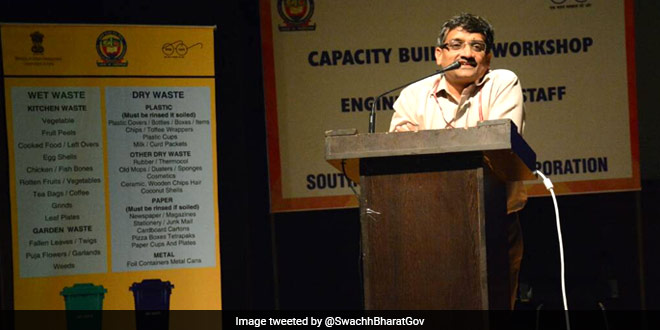 New Delhi: The staff of the South Delhi Municipal Corporation (SDMC) on June 20 pledged to work towards improving the ranking of the civic body in the next Swachh Bharat survey, and set a target of keeping its position within 25. In the Swachh Bharat reckoning of 434 cities for 2016-17, areas falling under the SDMC were ranked 202. East and North Delhi municipal corporations had also finished poorly in the reckoning, at 196 and 279 respectively.

SDMC Commissioner P K Goel addressed a gathering of engineering and sanitation staff up to the level of junior engineers (JEs) and sanitary inspectors, at a capacity building workshop here, and exhorted them to work towards achieving this goal.

Very little time is left at our disposal and the challenge is daunting, hence we will have to work hard and realise personal responsibilities, Mr Goel said.

The commissioner said the SDMC could not achieve better ranking during 2017 Swacchta Survekshan since “we could not project our activities properly”.

It is time to wake up and work in tandem in order to ensure a substantial jump in the ranking he said, while instructing the staff to make all 104 wards open defecation free (ODF).

He asserted that improving cleanliness ranking to within 25 in the Swacchta Survekshan 2018 must be “our organizational goal and same should be achieved with self-motivation”.

The SDMC can do it as we are financially sound. Out of 60 lakh population under our jurisdiction, most of the inhabitants are affluent and they can render their cooperation, he added.

Mr Goel later administered pledge to the JEs and other field-level functionaries to contribute “at least 100 hours in one year for the cause of sanitation and ensure a better ranking.

He further said there was a need for constructing at least one compost bin in every ward within 15 days.

The commissioner also underlined the need to decentralize composting by bulk generators like major hotels.

In 2016, out of 73 cities, areas under the north, the South and the East Delhi Municipal Corporations had finished at 43rd, 39th and 52nd positions respectively.