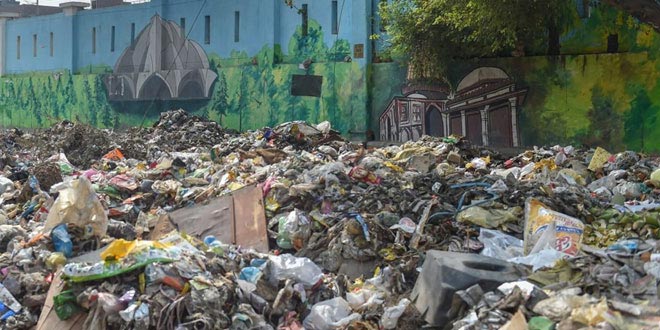 New Delhi: After nearly a month-long stir, sanitation workers of the cash-strapped East Delhi Municipal Corporation (EDMC) ended their strike after the civic authority agreed to accept their demands. The workers of the Bharatiya Janata Party (BJP)-led EDMC had gone on strike on September 12 demanding regular payment of salaries, pensions and regularisation of workers. “We called off our strike today, as the mayor gave us assurance that contractual workers would be regularised in a phased manner,” President of MCD Swachhata Karmchari Union (SKU) Sanjay Gahlot said.

Rani Devi, 40, was one of the 16,000 sanitation workers of the East Delhi Municipal Corporation (EDMC) who did not receive her salary for two months.

Both the Delhi and Central governments are playing politics with our lives. The two are feuding, and we are stuck with no salaries for months, affecting our livelihood, she said.

A large number of sanitation workers of the EDMC said that they had no option but to go on a strike, for the ninth time since 2015 over non-payment of salaries. Even after being on strike for almost a month when no concrete measures were announced, the union on Monday gathered at Jantar Mantar to continue their protest where they were allegedly ‘lathi charged’ by the Delhi Police.

The union also decided to call off the strike keeping public interest in mind as heaps of garbage, dumped at public places, were posing a health risk in localities under the EDMC. The areas worst affected by the strike include Dharampura, Kailash Nagar, Laxmi Nagar, Trilok Puri, Kalyan Puri, Geeta Colony and Shahdara. According to reports, almost every corner of these worst-hit areas is filled with garbage, making it impossible to miss the foul stench coming out of the leftover food, plastic bags and rotten vegetables.

There are piles of garbage everywhere. Diseases are spreading. When we go to the Municipal Corporation of Delhi (MCD) officials, they say they are on strike as they are not getting their salaries, a resident told ANI.

The Supreme Court on Monday, October 8, had said it was “unfortunate and tragic” that the Centre was not prepared to “make any payment at all” to resolve the crisis arising out of the strike by sanitation workers of EDMC over regular payment of salaries. A bench of Justices Madan B Lokur and Deepak Gupta noted that the court had expected the Centre to “graciously reciprocate” to the offer of the Delhi government which agreed to release Rs.500 crore to civic bodies on humanitarian grounds.

The SKU back then had accused Prime Minister Narendra Modi and Delhi Chief Minister Arvind Kejriwal of being indifferent to their problems. SKU member Anil Kumar had said, “Arvind Kejriwal uses broomstick as a party symbol only for votes. This is the reality. He does not care about sanitation workers.”

Prime Minister Narendra Modi gives crores of rupees to Nirav Modi and Vijay Mallya and helps them to escape the country, but he struggles hard to pay our monthly salaries, Mr. Kumar had added angrily.

Last week, the Delhi government had claimed that it had released Rs.770 crore to the EDMC in less than six months of the current financial year. The EDMC has around 16,000 workers, half of whom are permanent employees.

How is it possible that the EDMC, which could pay the salaries in 2014 to 2015 in half the funds that it got from the Delhi government then, now says it is unable to do so when it is getting almost double the amount? Mr. Kejriwal had said last week.

On October 4, Mr. Kejriwal attacked the BJP-led central government and the BJP-ruled municipal corporations in Delhi, saying that both were playing ‘dirty politics’ with the sanitation workers.

On October 8, the civic body had terminated the services of 26 contractual sanitation workers and suspended 17 others, with immediate effect for allegedly “creating obstruction” in work. However, Mr. Gahlot claimed that the suspension will be revoked.

We had separate meetings with the East Delhi mayor and the commissioner on Tuesday and they both gave assurances about regularisation of contractual workers employed after March 1998. Our other demands are also being looked into, the mayor also gave us verbal assurance that these workers would also be restored, Gahlot claimed.

Written with inputs from PTI.