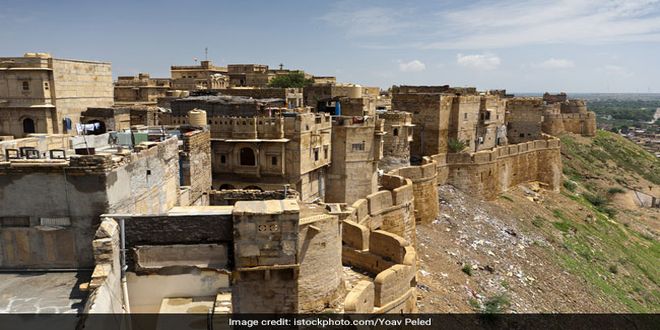 New Delhi: One of India’s best-known heritage structures and UNSECO Heritage site, Jaisalmer Fort is degrading and is in danger of collapsing. The most significant problem it is facing is that of toxic water seeping into its walls that is weakening the fort walls. The fort is built on a sedimentary rock foothill because of which water seepage is caused by poor sewage and sanitation system. Taking cognizance of the degrading condition of the Sonar Qila (Golden Fort), as it is popularly called because of its massive yellow sandstone walls, the Royal Family of Jaisalmer organised an awareness programme on October 2 for the community residing inside the fort. The panel discussion organised in partnership with the Global Citizen India, aimed at engaging the youth to step forward to improve health and sanitation in the oldest living fort in the world, and in turn boost tourism.

There are 3000 families, mostly from the Brahmin and Daroga communities, residing inside the fort and are dependent on a traditional sewage system which allows for the easy drainage of dirty water away from the fort in all directions. However, its usefulness has reduced due to new road constructions and expansion of civic amenities. Drains often get choked with garbage generated by the increasing population inside the fort and growing tourism and commercial activities. Sewage pipelines were laid in 1991 but they were not designed to take much load. This has increased the water seepage problem. The Archeological Survey of India (ASI) and the Government of India are now replacing the old sewage plan with a new one that has better pipes and manholes, informed the Crown Prince of Jaisalmer Chaitanya Raj Singh.

Talking about the waste disposal system in the fort, the Prince said, Because it is a living fort, a lot of waste is generated every day, and a large number of tourists visit every year, about 4 lakh tourists visit the fort during Diwali itself, this generates a lot of garbage but there is no waste management plant in Jaisalmer, all the garbage is dumped in a landfill like in many other cities in India.

Prince Chaitanya Raj Singh informed that now every house inside the fort has a toilet and the Royal family has also donated a piece of land to build common toilets in the central part of the fort but there are still some people who prefer using traditional bathrooms. He said, “Our family trust has helped people build toilets in their houses and now every house has a toilet. There are also some traditional bathrooms in the open spaces of the fort in which after people go, the waste goes down the hill without the use of water, and there are some people who still use these bathrooms as they are comfortable with it.”

Prince Chaitanya Raj Singh said, “There are some NGOs like ‘I Love Jaisalmer’ that have helped in raising awareness on keeping the fort clean by organizing awareness campaigns and meets to instill among people a sense of ownership of their problems and responsibilities. Everyone in the fort now knows about the problem and is also fed-up with the situation and wants a solution. So we have decided to sit with the stakeholders and come up with an action plan to fix the fort. The fort will be fixed locally with the help of its residents with the technical help of professionals like conservation architect and NGOs.” He added, “ASI needs to step up in case of the Jaisalmer Fort, they only fix a wall when it falls and not when it shows the sign of damage and the potential threat of collapsing.” In the last few years, the fort has got visible cracks in the walls and has seen some of its peripheral walls collapsing due to heavy rainfall and earthquake near the Indo-Pak border.

The Queen of Jaisalmer, Raseshwari Devi said, “Involvement of the local people is key to preserving the fort because it is their home, they live here, this is their home, and who better than they can take care of the fort and if there has to be a difference made, it has to start from an individual and then the society is changed we need them to collectively take initiative.”
Prince Chaitanya Raj Singh is keen to tap the Manganiar Tribe to spread awareness among the locals to preserve the fort. Manganiar is a tribe of musicians and dancers who live in Jaisalmer city and perform regional folk songs like ‘Panihari’. Salim, a Manganiar said, “In the olden days, Jaisalmer was facing water shortage and the women were required to walk miles to fetch water for their families, they used to sing a folk song called ‘panihari’ talking about the importance of water during their travel”. Now, the tribe can be part of awareness programmes to motivate people through their music to adopt clean and hygienic lifestyle.

The Crown Prince also called for the participation of the youth and the residents of Jaisalmer in fixing the fort. The residents of the fort especially the youth pledged during the programme to spread the word and take action to stop the slow erosion and destruction that is happening now so that it be saved from crumbling down if not fixed.