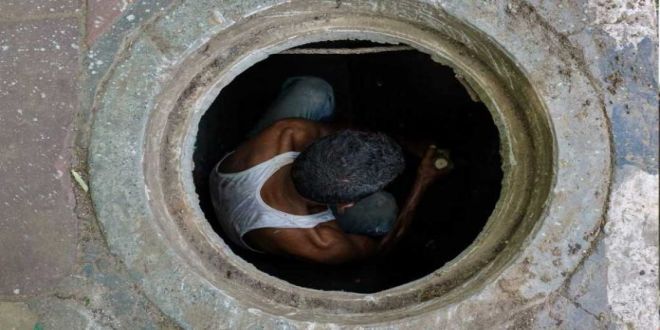 A senior official from Delhi Commission for Safai Karamcharis said, “The Chief Minister held a meeting in the last week of September of the state monitoring committee on the prohibition of manual scavenging and directed the district Magistrates to identify manual scavengers, skill train them and rehabilitate them in Civil Defence Corps”. The officer further said that the Chief Minister has warned that the DM (District Magistrate) will be held responsible and actions will be taken if a district reports zero manual scavengers in their jurisdiction and any death occurs while cleaning of septic tanks, sewers, and gutters.

Only three districts in Delhi (Shahdara, North East and East Delhi) have identified manual scavengers while other eight districts reported zero people engaged in this practice. Therefore, the identification will be done again following the procedure mentioned in the Prohibition of Employment as Manual Scavengers and their Rehabilitation Act, 2013 which includes organising survey camps where people can fill up an application form to identify themselves as manual scavengers and avail the benefits of schemes for rehabilitation post verification by the civic bodies.

The Officer also informed that the Delhi government will be formulating new schemes for rehabilitation of manual scavengers soon, which will include schemes like scholarships for their children, residential plots or a flat for them and training to help them find an alternative livelihood. Currently, Delhi Scheduled Castes Financial and Development Corporation (DSFDC) is running schemes providing financial assistance and training programmes to manual scavengers for self-employment. Delhi Jal Board is also providing sewer cleaning machines at subsidised rates to the manual scavengers and the dependents of the deceased manual scavengers.

District Magistrate of Shahdara and East Districts, Kumar Mahesh started a three-month long training programme last month which will be imparting training to manual scavengers identified in North-East, East and Shahdara districts on housekeeping and has assured them jobs in the private sector. Mr. Mahesh said that the local governments of other districts of Delhi are also planning similar interventions once they complete the identification of manual scavengers. Vinay Stephen of the Sadik Masih Medical Social Servant Society (SMMSSS), the NGO providing the training said, “We are currently training 50 people, we want to bring change in their outlook towards life and want to help them break the caste barrier and enter into other professions too. As a pilot project, we are currently focusing only on training them in housekeeping skills but we will also start training on accounting and medical services in the next phase.”

With the slogan of ‘Mera Hunar, Mera Samman’, the trainees feel motivated and are determined to leave the work of manual scavengers and build a healthy and dignified life. Rishi Pal, 49 years, one of the trainees said he left his 25-year old family profession of manual scavenging a few months back after some government officials and NGOs told him that they can help him find an alternative means of livelihood. “I have seen people die inside the drains, I too fell unconscious inside the drain once, a few years back, because of the overpowering toxic fumes inside the drain. A lot of my friends consume alcohol before going inside the drains for cleaning them so that they can feel less”, Rishi Pal said. He further said that the government agencies do not hire them for cleaning drains, it is the private builders and homeowners who hire them to clean drains and septic tanks.

After I have started attending the training, I feel hopeful and more confident and I believe that the government will find a better job for me. They are also giving me Rs.1000 per month during the training period as a stipend. I even tell some of my friends to leave manual scavenging and come for the training but they don’t want the government to know they are working as manual scavengers in fear of losing the small earnings they have now, said Rishi Pal.

Mr. Mahesh said that identification is a big challenge as there is a lot of stigma attached to this work in society and it has always been biased against sanitation workers. “Due to the deep-rooted prejudice and stigma against sanitation workers, most people do not come forward to identify themselves as manual scavengers or as their relatives and so are not able to benefit from government schemes and programmes. With the help of NGOs and community leaders we are trying build awareness and to win the trust of the sanitation workers and bring them to the training centre where we prepare them to take up more dignified and better-earning jobs. They can also volunteer for the civil defense forces as Chief Minister suggested but since it does not fetch any income as it is a voluntary force, we are trying to motivate them to get skilled trained and are also assuring jobs to them in private sector”, he said.

Talking about the long-term solution, the senior official of Delhi Commission for Safai Karamchiris said that the permanent solution to the problem of manual scavenging in the country lies in the change of attitude of the society and employers should start hiring manual scavengers into better jobs without being biased against them because of their caste or earlier job profile. “I want to appeal to the corporations especially in the hospitality sector to hire sanitation workers and participate in the rehabilitation of fellow human beings from inhumane and demeaning work into the mainstream”, said Mr. Vinay Stephen.

“Sanitation is a State subject and needs to be tackled locally”, Mr. Mahesh asserted and added, “Violation of law at the local level is one of the biggest reasons for manual scavenging deaths are still occurring. Banning manual scavenging alone cannot help. Planned rehabilitation of manual scavengers in dignified jobs along with strategic mechanisation of drains and septic tank cleaning should be the focus.”

India enters the fifth year of Swachh Bharat Mission this month. The mission has been successful in building a nationwide momentum in terms of toilet construction, unlike the previous national sanitation programs like Nirmal Bharat Abhiyan, Total Sanitation Programme, Basic Services for Urban Poor, and Central Rural Sanitation Programme. Tackling manual scavenging, however, seems to be missing from all the aforementioned sanitation programmes and faces a major lack of commitment on part of the agencies dealing with the plight of sanitation workers. Swachh Bharat Mission does mention ending manual scavenging as one of its objectives as it aims to convert dry latrines to pour- flush toilets. But none of the Mission’s guidelines has any safeguards for manual scavengers cleaning the septic tanks, sewers, and gutters. This is why despite being banned by law in 1993, manual scavenging is still prevalent in India.

As informed by the Ministry of Social Justice and empowerment (MoSJE), in a reply to an unstarred question number 594, raised in Lok Sabha, the central scheme of ‘Self Employment Scheme for the Rehabilitation of Manual Scavengers’ has seen a decrease in budgetary allocation from Rs. 448 crore in 2014-15 to just Rs. 5 crore in 2017-18. The allocation was increased to Rs. 20 crores in 2018-19. The MoSJE said that this drastic drop happened because the National Safai Karamcharis Finance and Development Corporation (NSKFDC) which is the implementing agency for the scheme on rehabilitation of manual scavengers had an adequate corpus fund. According to NSKFDC’s Annual Report 2016-17, as on March 31, 2017, the fund available with it for the scheme on rehabilitation of manual scavengers was Rs. 24.32 crore.

The important point to note here is that even after the enforcement of Prohibition of Employment as Manual Scavengers and their Rehabilitation Act in December 2013, the Actual Expenditure under this scheme for financial years 2014-2016 was zero. We are yet to get the actual figures for the expenditure done under this scheme in 2017 which will be revealed in the annual budget for 2019-20. A senior official from MoSJE said, “The expenditure under this scheme was zero because the identification survey of manual scavengers was still underway, now after the survey has been done, we have booked expenditure under this budget head. We did pay a one-time assistance Rs. 40,000 to 13,697 manual scavengers few years back after the first survey but after that we got requests from all the state again that they have identified more manual scavengers, so we had to do another survey to first identify and then allocate funds for rehabilitation accordingly.”

Manual scavenging was made illegal in India under Employment of Manual Scavengers and Construction of Dry Latrines (Prohibition) Act, 1993. Nonetheless, the sanitation landscape in India still requires people to do this fatal and demeaning activity. According to the Socio-Economic Castes Census of 2011, there are 182,505 households involved in manual scavenging in India. Manual Scavenging is taking a toll on the health and lives of people who have taken up this work as a means of livelihood. The health hazard stems from the inhalation of poisonous gases like methane, hydrogen sulphide, and nitrogen oxide when these workers go down into the drains. The National Commission For Safai Karamcharis reported 634 deaths related to manual scavenging in the last 25 years. However, according to the NGO engaged in fighting against this evil practice since 1993, Safai Karamchari Andolan, 1,760 deaths have been reported in the last two decades. The 1993 Act (enacted under state list) proved to be weak and ineffective and was revised in 2013, enacted under concurrent list, including sewer and septic tank cleaning along with dry latrines.

A crusader against manual scavenging in India, Bezwada Wilson observed that the law is weak and has many loopholes.

He said, Many people found excuses to escape from the purview of the law for example, according to the 1993 Act, the District Magistrate which is the executive authority under this Act has to appoint implementing officers who can lodge a complaint against the perpetrator. But in the case of Municipal corporations, perpetrator happens to be the District Magistrate, so in this case, the implementing officers are required to file a complaint against the DM which they may never do. Likewise, there were many lacunas we found. The new Act (2013), though improved still has some lacunas. They have removed the clause which says that the public servants should be held accountable if manual scavenging is happening in their states in the new Act.

Amidst this scenario, the Delhi Government’s decision to rehabilitate the scavengers by training them and helping them lead a life of dignity is a welcome step, says Mr. Vinay Stephen. However, Mr. Wilson is not expecting much from rehabilitation programmes of the State. He said, “There is a huge lack of political will as far as its implementation is concerned. 93 people died in Delhi since 1993 and the families of just a few have deceased manual scavengers have got compensation till now and that to partial compensation.” Mr. Wilson said that the Centre says sanitation comes under the purview of the State which says the unauthorized private identities are the culprits but perpetrators are not being punished. He said, “No step has been taken against DLF till now in the Moti Nagar case.” He says the only way to tackle manual scavenging is by holding the public servants accountable and proper implementation of the law.