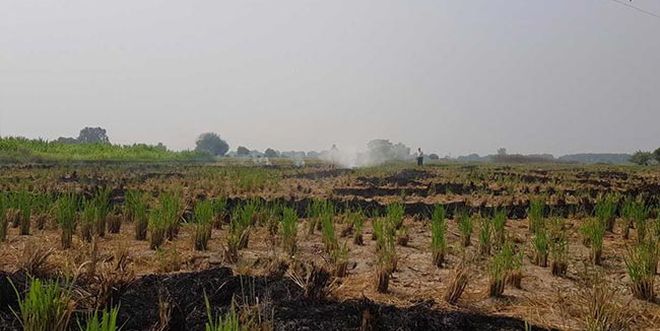 New Delhi: Stubble burning in Punjab and Haryana has been blamed for the ‘severe plus’ air pollution levels in Delhi NCR and the recent thick toxic smog. In the month of November, farmers typically harvest rice to sow wheat. After the harvest, they often set the leftover plant debris (50-60 cm) on fire to clear fields for the next plantings, a practice known as stubble burning which has become an annual nuisance for the environment and human health.

Notably, stubble burning is a relatively new phenomenon. In earlier times, farmers used to harvest and plow fields manually, tilling plant debris back into the soil. But the problem of stubble burning started with the mechanisation of harvesting and use of combines (a machine designed to efficiently harvest a variety of grain crop) in the early 1980s. The combine, which derives its name from combining three separate harvesting operations – reaping, threshing, and winnowing – into a single process, saves days of labour but leaves the useless paddy straw behind, leaving farmers with no choice but to burn to clear it.

Jasbir Singh Bains, Director of Agriculture, Punjab said that paddy straw composes of high silica content that animals are not able to digest, while the farmers properly manage the wheat straw as that is widely used as animal fodder. Since sufficient wheat straw is available, there is limited demand for paddy straw.

Also Read: Squabbling And Stubble Burning Continues As Air Quality Across North India Remains A Cause Of Concern

It costs about Rs 2500 to 3000 to farmers for managing the crop residue in a proper way, instead of burning. But due to cost concerns and urgency to sow wheat after harvesting paddy, farmers end up burning the straw to save time, labour and of course money,” said Director of Agriculture, Punjab.

We are giving 40 percent subsidy on machines that farmers will have to buy to manage the straw. However, we have limited the maximum subsidy amount to Rs 50,000, Mr Bains added.

In the wake of air pollution crisis in the national capital, the Union Agriculture Ministry issued an advisory to Delhi and its neighbouring state governments to create awareness among the farmers about the harmful effect of straw burning. The ministry also directed the governments to facilitate farmers in purchasing residue management machines and equipment.

According to the advisory, the state governments were also directed that Rs. 4000 per hectare shall be used from the funds available for demonstration of machines of straw management machinery at farmers’ fields.

Speaking on these directives, Mr Bains said, “The government and agriculture department is doing everything possible to create awareness among farmers to stop stubble burning and opt for available machines. But these machines require an investment of over a lakh, but small and medium farmers don’t have the money. Most are reeling from debts.”

“We have been setting up camps in villages to demonstrate how Super Straw Management System or S-SMS, a machine developed and recommended by Punjab Agriculture University to manage straw can be used,” he further added.

Manjeet Singh Makkar, who heads the farm machinery and power engineering department at Punjab Agricultural University, suggested that farmers should install S-SMS, which cost 1.25 lakh, on their combine harvesters to get around the problem of stubble burning.

A farmer buying S-SMS will get 40 percent subsidy on the total cost. Notably, over 29 manufactures are using S-SMS technology developed by Punjab Agriculture University for mass production. S-SMS cuts the straw into small pieces and scatters it evenly. Once this is done, another machine “Happy Seeder” which also costs around Rs. 1.25 lakh, can be mounted on a tractor to sow wheat and put the cut straw over the area as mulch, which improves soil fertility, said Mr Makkar.

The National Green Tribunal recommended penalising farmers who burn stubble, and Punjab attempted it but to no avail. Rather than penalising to stop stubble burning, the government should find uses for the stubble as farmers get no incentive to take the pain of extracting the stubble. Also, if the production of crops other than paddy is made more lucrative to farmers, then farmers may switch to growing those.