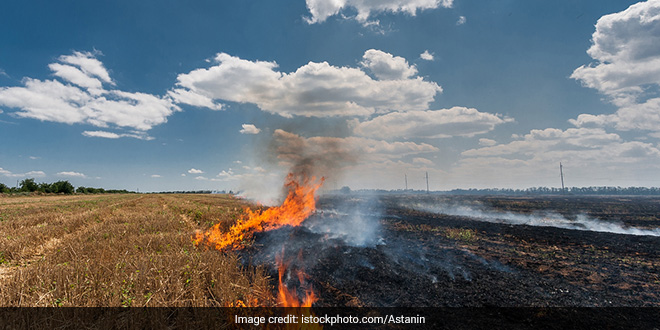 The Union Minister said in the first five days of November, the number of fire counts was much higher in Punjab than Haryana and Uttar Pradesh

New Delhi: Expressing serious concern over Delhi’s air quality remaining in the ‘severe’ category for the fifth day in a row, Union Minister Jitendra Singh said that air pollution-related stubble burning cases have witnessed a rise by 160 per cent in Rajasthan and 20 per cent in Punjab this October as compared to October 2021. According to the Ministry of Earth Science, the Union Minister also raised an alarm as Delhi recorded seven “very poor” air quality days in October this year compared to none in October 2021.

Referring to findings by the India Meteorological Department and Indian Institute of Tropical Meteorology under the aegis of the Ministry of Earth Sciences, Mr. Singh said,

There was 160 per cent and 20 per cent rise in cases of stubble burning in Rajasthan and Punjab respectively in October 2022 compared to October 2021.

This implies that the governments in the two States are not doing enough to check stubble burning and are, on the contrary, increasingly contributing to the deteriorating air quality in Delhi NCR, the Union Minister said.

The Minister, who is also Incharge of the India Meteorological Department (IMD), Ministry of Earth Sciences, said that on the other hand, States like Haryana and Uttar Pradesh have recorded a progressive decline in the incidents of stubble fire burning.

Such inferences indicate that either the governments in Rajasthan and Punjab are not serious about air quality or they have not properly utilized the funds which were provided by the Narendra Modi government to purchase machines for stubble management, he said.

Mr. Singh pointed out that since 2018-19, on the instructions of Prime Minister Narendra Modi, the Centre has provided Rs 3,138 crore to States for stubble management, out of which nearly 1,500 crore was provided to Punjab alone.

It is for the people to judge as to why, while many States have done an appreciable job in stubble management and are gradually moving in positive directions, the States of Punjab and Rajasthan continue to show further deterioration raising several questions regarding their intent, sincerity and prosperity, Mr Singh added.

He also pointed out that Haryana and Uttar Pradesh witnessed a decline in farm fire incidents by 30 per cent and 38 per cent respectively during the same period.

The Union Minister said in the first five days of November, the number of fire counts was much higher in Punjab than Haryana and Uttar Pradesh.

For example, on 5 November, the number of fire counts in Punjab was 2,817 and in Rajasthan 91 respectively compared to 90 in Haryana and 24 in Uttar Pradesh respectively. The highest fire count on any single day was recorded on November 2, when Punjab topped with 3,634 farm fire incidents and the number in Rajasthan recorded up to 63, he explained.

Mr. Singh said the abnormal rise in cases of stubble burning in Punjab in the first five days of November is solely responsible for plunging the air quality in the severe category. He said Punjab registered 13,396 fire counts from November 1 to 5, while it was 16,004 for the entire month of October 2022.

India Meteorological Department and the Indian Institute of Tropical Meteorology under the aegis of the Ministry of Earth Sciences has operationalized Air Quality Early Warning System (AQEWS). The contribution of Stubble fire in the pollution level of PM2.5 is estimated by AQEWS.

Meet Stella, A Therapy Dog Who Is Helping People Curb Anxiety And Depression