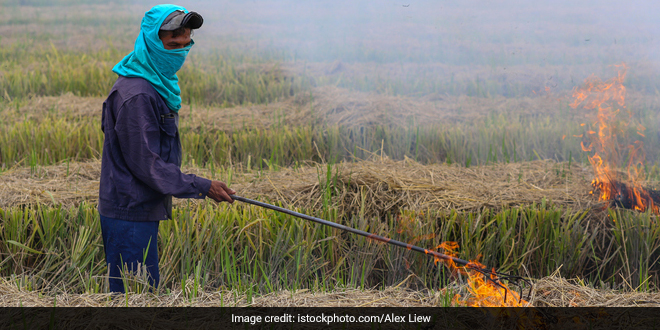 Six districts in Punjab account for 4,899 cases of stubble burning against a total of 7,036 incidents in Punjab

New Delhi: Commission for Air Quality Management in NCR and adjoining areas has issued statutory directions for the implementation of the State Specific Action Plan. This comes in light of increased incidents of stubble burning in Punjab this year. CAQM stated that as per the satellite remote sensing data, up to October 24, 2022, only about 39 per cent of sown area in Punjab had been harvested and thus the rising number of fire events is a matter of concern. As per the Standard Protocol developed by ISRO for CAQM, for the period September 15, 2022, to October 26 2022, total paddy residue burning events reported in Punjab are 7,036 compared to 6,463 for the same period during the last year.

CAQM further stated that about 70 per cent of farm fires during the current paddy harvesting season were reported only from six districts namely Amritsar, Firozpur, Gurdaspur, Kapurthala, Patiala and Tarn Taran.

These Districts account for 4,899 cases against a total of 7,036 incidents in Punjab. These traditional six hotspot districts also accounted for about 65 per cent of the total burning incidents during the last year for the same period. Out of a total of 7,036 reported cases, 4,315 stubble-burning incidences were reported during the last six days alone i.e., about 61 per cent.

Based on a broad framework developed by the Commission and learnings from the past paddy harvesting seasons, a comprehensive Action Plan was prepared by the State Government of Punjab, with the following significant action pillars

The Commission stated that it has been closely working with the Government of Punjab, starting in February 2022, well before the paddy sowing season 2022, to sensitize the State Administrative machinery towards their preparedness to prevent and control the incidents of stubble burning.

For effective implementation of the plan of action, the Commission also held consultative meetings with major Departments concerned with the Government of Punjab like Agriculture and Farmer’s Welfare, Environment, Power and Punjab Pollution Control Board.

The Commission has held nine meetings with Officials of the Government of Punjab from time to time regarding various issues related to stubble burning, including five meetings with the Chief Secretary. Key areas and action points stressed during the meetings were speedy procurement of additional farm machinery through fund allocations made by MoAFW under the Crop Residue Management (CRM) Scheme during 2022-23.

The Commission is closely working with the Chief Secretary, of the Government of Punjab for the effective implementation of the Action Plan including all strategies for stubble management and appropriate actions in all reported cases of farm fires. Review meetings were also held with all Deputy Commissioners with a special focus on hotspot Districts, considering their critical role as assigned in the Action Plan of the State Government.

In Haryana, the total number of farm fire events reported for the period September 15, 2022, to October 26, 2022, is 1,495 compared to 2,010 for the same period last year. There is about a 26 per cent reduction in paddy residue burning events in Haryana so far during the current year.

In a review meeting held with the Chief Secretary, of Haryana and Deputy Commissioners last week, the Commission has advised to further intensify their efforts to control the farm fire events in the State of Haryana.

India Needs 108 Million Tonnes Of Foodgrains A Year To Be Distributed To The Poor: Union Minister Piyush Goyal