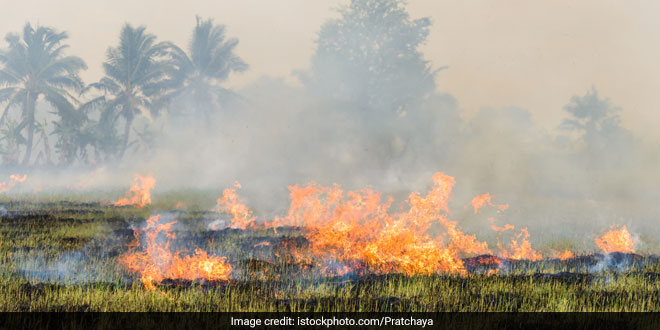 New Delhi: The stubble burning will no longer be an issue for farmers, but a source of income for them. Union Minister of State for Agriculture and Farmers Welfare Kailash Chaudhary has said that the government is considering making better use of the stubble so that it provides income to the farmers. In a special conversation with IANS, Mr Chaudhary said that the Prime Minister dreams of doubling the income of farmers by 2022 and the government is working towards better use of stubble to increase farmers’ income.

He said that the government is considering such measures so that farmers do not need to burn stubble, instead, they can increase their income.

The Minister said: “I met some youngsters who told me that they will be able to use the stubble to produce mushrooms. In addition, the stubble is also being considered for making tiles.”

He said that the government was considering all the measures, including the stubble to used as fuel.

In the coming two-three years, there will be no problem of stubble burning, in this direction scientists of ICAR (Indian Council of Agricultural Research) are also looking for solutions, Mr Chaudhary said.

Due to the incidents of stubble burning by farmers of Punjab, Haryana, Western Uttar Pradesh and Delhi, the air pollution in Delhi-NCR has increased to alarming proportions.

On a question that all blame is being put on the farmers, the Minister said:

He said that the Centre stands with the farmers and is working towards increasing their income by using the stubble in a constructive manner.

Farmers are being told how they can use the stubble to prepare the manure. Also, it can be used as fodder for cattle. Hence, the stubble will not be a problem, but a source of income for the farmers.