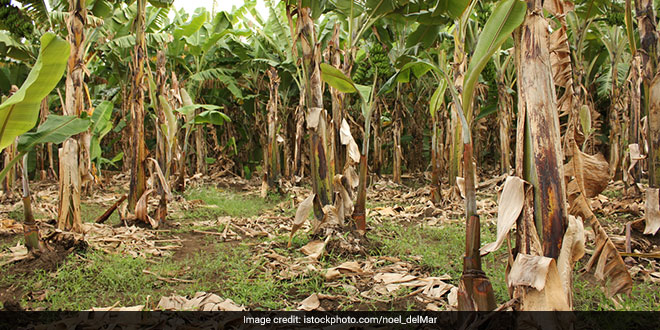 Sydney: An Indian-origin researcher-led team at the University of New South Wales (UNSW) on Friday (November 28) announced it has discovered a novel way to turn banana plantation waste into packaging material that is not only biodegradable but also recyclable. Associate Professor Jayashree Arcot and Professor Martina Stenzel looked at ways to convert agricultural waste into something that could value-add to the industry it came from, while potentially solving problems for another. “What makes the banana growing business particularly wasteful compared to other fruit crops is the fact that the plant dies after each harvest,” Ms Arcot from UNSW School of Chemical Engineering, said in a statement.

We were particularly interested in the pseudostems – basically the layered, fleshy trunk of the plant which is cut down after each harvest and mostly discarded on the field. Some of it is used for textiles, some as compost, but other than that, it’s a huge waste, she added.

According to Ms Arcot, banana growing industry produces large amounts of organic waste, with only 12 per cent of the plant being used (the fruit) while the rest is discarded after harvest.

Using a reliable supply of pseudostem material from banana plants grown at the Royal Botanic Garden Sydney, the duo set to work in extracting cellulose to test its suitability as a packaging alternative.

The pseudostem is 90 per cent water, so the solid material ends up reducing down to about 10 per cent, Ms Arcot noted.

The team brought the pseudostem into the lab and chopped it into pieces, dried it at very low temperatures in a drying oven, and then milled it into a very fine powder.

The team then took this powder and washed it with a very soft chemical treatment.

“This isolates what we call nano-cellulose which is a material of high value with a whole range of applications. One of those applications that interested us greatly was packaging, particularly single-use food packaging where so much ends up in landfill,” informed Stenzel.

When processed, the material has a consistency similar to baking paper.

Depending on the intended thickness, the material could be used in a number of different formats in food packaging.

There are some options at this point, we could make a shopping bag, for example, said Ms Arcot.

The material is also recyclable.

One of our PhD students proved that we can recycle this for three times without any change in properties, Ms Arcot added.

Tests with food have proved that it poses no contamination risks.

Other uses of agricultural waste that the duo has looked at are in the cotton industry and rice growing industry – they have extracted cellulose from both waste cotton gathered from cotton gins and rice paddy husks.

“What makes bananas so attractive in addition to the quality of the cellulose content is the fact that they are an annual plant,” said Ms Arcot who has been at UNSW since 1990 after completing her education from Bachelor’s and Master’s from the University of Madras and PhD from AP Agricultural University, Hyderabad.

If the banana industry can come on board, and they say to their farmers or growers that there’s a lot of value in using those pseudostems to make into a powder which you could then sell, that’s a much better option for them as well as for us, said the researchers.

The UNSW has more than 52,000 students from nearly 130 countries, and the highest are from India.

Also Read: Wooden Or Steel Cutlery To Replace Plastic And Other Such Solutions To Cut Down Waste Is What This Bengaluru Start-up Does

Stubble To Become A Source Of Income For Farmers: Union Minister Kailash Chaudhary