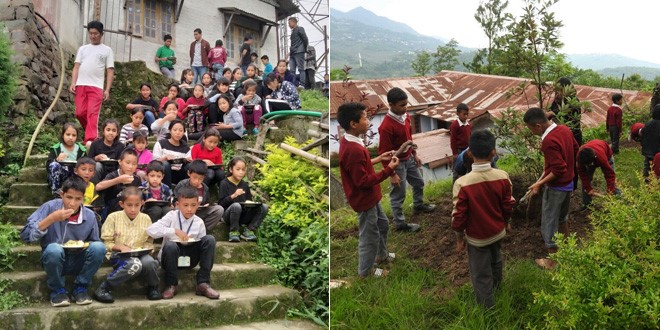 New Delhi: To provide nutritious food to students through mid-day meals, K Khel Government Middle School in Viswema village of Kohima, Nagaland, has been growing vegetables organically in its premise for the past few years. The produce, which is free from chemical fertilisers, is then used in cooking mid-day meals for the 60 plus students of the school. According to the headmistress, the entire farming process is carried out by the students themselves under the guidance of the teachers. While talking to NDTV about the initiative, headmistress Keneisenu Vitsu said,

We started a kitchen garden in 2011. In the initial days, in the empty plot in the school, we planted flowers in half of the area and vegetables in the other half. Later on, we gave up the flower plantation to focus completely on cultivating vegetables. We have been cultivating a variety of indigenous vegetables as per the season. We make sure that it is completely organic and chemical fertiliser of any kind is not used.

She further said that there are currently 63 students enrolled in the school and each one of them is involved in the cultivation of vegetables. She said,

Farming and gardening is an integral part of our curriculum. We decided to teach organic farming to the kids to inculcate in them the skill and knowledge of agriculture. We keep one day in a month dedicated to teaching activities related to gardening and agriculture.

With supervision from their teachers, the students of classes 1-8 first select a plot of land and prepare it for cultivating vegetables by cleaning and levelling it. The students are also taught to make organic manure with kitchen waste from their homes and uprooted weeds. Then the students sow local organic seeds according to the season, take care of the crop, cut the vegetables and clean them too. After their regular classes, the children head out to the garden, armed with spades, trowels and watering cans to tend to their plants – watering, weeding or adding green manure. They practise multiple-cropping to maintain the nutritional balance of the soil. The students also learn to build bamboo fences to keep cattle away from the plot. As per Ms. Vitsu, students repeat this process for every cycle of cultivation.

According to Ms. Vitsu, the fresh farm produce is consumed by the students in their mid-day meals prepared by the school cook. She said,

Ms. Vitsu further shared that malnutrition is not a problem in Viswema village and most students take their breakfast before coming to school. However, the school aims to ensure that the children get nutritious and wholesome meals during the day as well.

The students of this school feel proud to be a part of this initiative. Nokerhenii Koso, a student of class 7 said,

We plant the herbs and vegetable with our own hands. It’s so nice and fun to cut the vegetables and clean it. We look forward to the farming class as it has helped me learn so much about farming. I also have a small kitchen garden at my home.

Established in 1973, the school, K Khel Government Middle School has become a trend-setter in the village. While several schools in the state and in other parts of the country are introducing organic farming, this school has been practising it for nine years now. Ms. Vitsu said that the school has been receiving great support and appreciation from parents and some of them have even started kitchen gardens of their own. Zhoto Stephen, who runs a community service centre and a grocery store said,

It is a very good concept. We are happy that the children of our village are learning the nitty-gritties of agriculture and thus getting closer to mother Earth. They are not only learning to grow their own food and become independent, but they are also learning about how to save the planet and be more sustainable.

Apart from organic farming, K Khel Government Middle School has an eco-club that organises a variety of environmental activities with an aim to make the children and adults of their village aware about plastic and air pollution that is threatening the environment and the importance of planting trees. They are also engaged in encouraging people to use bamboo waste bins and practice waste segregation by conducting various workshops and meetings as part of eco-club and social service class.

Kerala Declares Coronavirus A State Calamity, Here Are Five Things To Know About The Outbreak

Coronavirus Outbreak: Experts Address Myths Vs Facts About The Disease