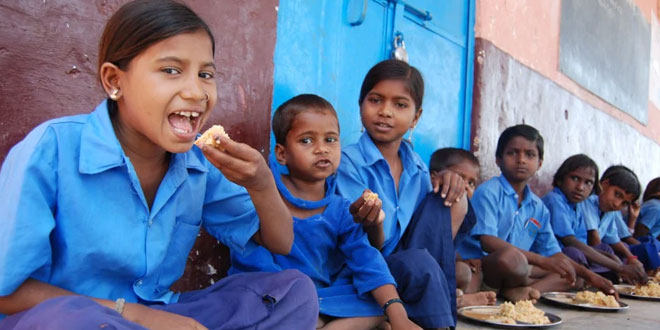 New Delhi: Nutrition Support to Primary Education Scheme popularly referred to as Mid-Day Meal programme (MDM) was launched in 1995. According to Deepa Anand, Deputy Secretary, Ministry of Human Resource Development (MHRD), MDM is considered as the largest school feeding programme in the world. There are about 20.8 crore primary and upper primary school children (6-14 years) in India, as per the Population Census, 2011 which forms about 17.2 per cent of the total population of the country. The United Nations estimates that four out of 10 children in India are not meeting their full human potential because of chronic undernutrition. The MDM scheme was introduced to overcome this and protect the nutritional rights of children, said Ms. Anand.

As India moves towards fulfilling the target of eradicating malnutrition from the country and contributing to the second goal of Sustainable Development Goals (SDGs) to end all forms of hunger and malnutrition, here is a quick lowdown of things to know about the mid-day meal scheme of the country:

The concept of providing meals to students was first introduced in 1925 in India and Tamil Nadu was the first state in India to introduce a noon meal programme in primary schools followed by Gujarat, Kerala and other states. Later it was taken up as a national scheme called Nutrition Support to Primary Education Scheme or Mid-Day Meal programme which was launched on August 15, 1995, in 2,408 blocks across the country for providing one meal per day to students in primary school (Class I to V).

Implemented by the MHRD in the centre and departments like education department or women and child development department or the Panchayati Raj department in states, the scheme was made universal in all public schools in 2001 after the Supreme Court’s directions dated November 28 of the same year. The scope scheme was extended to cover the students of Upper Primary (Class VI to VIII) in 2007.

The key objective of the MDM is to address the issues of hunger and education in schools by serving hot cooked meals. It also aims to improve the nutritional status of children and improve enrollment, attendance and retention rates in schools and other education centres.

Who is the target beneficiary of Mid-Day Meal Programme?

According to MDM Scheme every child studying in primary and upper primary classes in government schools and government-aided schools like Alternative and Innovative Education (AIE) centres and Madrasas will get free lunch. The Supreme Court, in its direction to all states in 2001 said,

Every child in every government and government-assisted school should be given a prepared midday meal.

Another order of Supreme Court, dated April 20, 2004, directed the states to provide mid-day meals during summer vacations as well in the drought affected areas.

According to the MHRD data, about 9.12 crore children benefited from MDM across 11.35 Lakh schools across the country.

The Mid-Day Meal Guidelines ensure that the meal is designed in such a way that children get sufficient amount of proteins, carbohydrates, as well as micronutrients, such as iron and folic acid. The aim is to aid in the physical growth and cognitive development of children. The meal comprises cooked rice or wheat (depending on the local staple), mixed with lentils or jaggery, and supplemented with oil, vegetables, fruits, nuts, eggs or dessert at the local level. 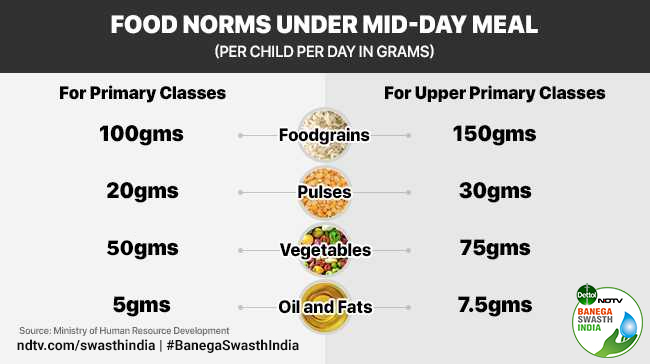 Is there a Correlation between Mid-Day Meals and Learning Outcomes?

According to Elementary and Social Education Professor Anita Rampal, at the Department of Education, University of Delhi, mid-day meal programme has a positive impact on the learning outcomes. She said that children tend to attend school more where mid-day meal is being served. She asserted,

Our experience has been that children belonging to disadvantaged sections receiving school lunches are better at reading and math skills than the children not having mid-day meals.

What are the infrastructural provisions under the Mid-Day Meal Programme?

According to the MDM norms, there has to be one helper/cook up to 25 children, two helpers up to 26-100 children. One extra helper with every addition of 100 children. Each cook/helper is given an honorarium of Rs. 1000 per month. The required infrastructure includes, a kitchen shed, cooking and serving utensils, cooking stoves and cooking fuel.

What is the Cooking cost per child per meal?

What is the Contribution of Centre and State?

Private Participation in the implementation of the programme

The implementation of MDM is supported by some non-governmental organisations (NGOs) in various states under the public-private partnership with state government, for example, Akshaya Patra Foundation which is helping in running the scheme in 12 states, Annamrita, Nandi organisation, and ISKON among others. As per Ms. Deepa Anand, the states can partner with NGOs but the important thing to focus on is to provide fresh and hot meal to children.