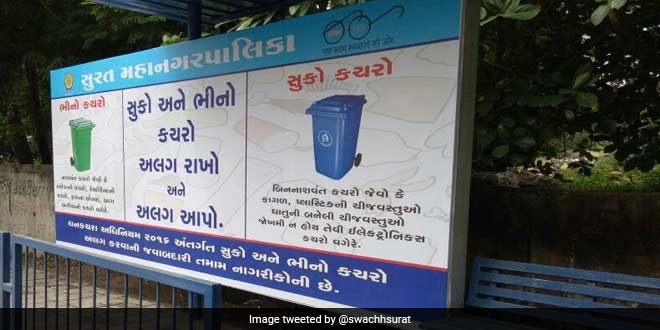 New Delhi: Considering children as the change-makers of tomorrow, Health and Sanitation department of Surat Municipal Corporation (SMC) is planning a cleanliness programme packed with social activities starting from October 1. SMC will be involving around 15 lakh school children in the programme in various cleanliness activities. Some children will be included in cleanliness drives that will take place in and around their schools, colonies and their homes and in some part of the slum areas; and others will be interacting with the people on segregation of waste at source, on ‘shramdaan’ (volunteering for cleanliness) and on the issue of open defecation, building awareness about cleanliness and sensitizing parents, neighbours and relatives on assuming a cleaner and more eco-friendly lifestyle. The concluding date for the program has not been decided yet.

“We believe that children are the most effective agents of change and we trust them with our cleanliness mission. We will be to taking up this swachhta drive in schools and homes of the children as part of our social activity, we have decided. We plan to involve nearly 15 lakh school children in this drive. We want to continue working with school children on cleanliness and we want to assign activities related to cleanliness as social assignments for them to percolate our message of cleanliness to their homes and surroundings,” said Dr Aashish Naik, deputy commissioner of health, SMC.

Children are expected to dedicate at least 25 hours each from their free time during the cleanliness program. They will be given a certificate of appreciation of their contribution and will be asked to take a pledge to always keep their surroundings clean. Dr. Aashish Naik said that teams of SMC workers will be formed that will go to all the schools and explain the basic aspects of cleanliness to children. “Students will be asked to first keep their houses clean and then their city and the habit of swachhta should be incorporated into the education system, this is our main motto behind this activity” he added. SMC will also be involving its workers in a cleanliness drive being organized on September 30.