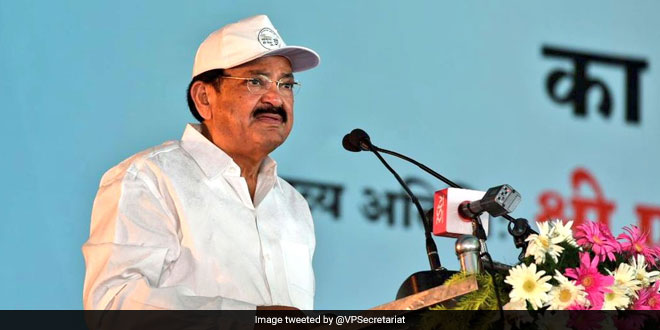 New Delhi: “It is a matter of satisfaction that in the last four years, the country has adopted the Swachh Bharat calling of the Prime Minister and given it the nature of a mass movement. Community cleanliness cannot be obtained just by government programs. It needs public acceptance to be a mass movement”, said Vice President of India M. Venkaiah Naidu, speaking at the public-awareness-cum-awareness program under the ‘Cleanliness Service-2018’ organised by the Drinking Water and Sanitation Department in Lalkhatanga Panchayat, Ranchi, Jharkhand.

Shedding light on the achievements of the Swachh Bharat Abhiyan which has now turned into a mass movement, as touted by the Vice President, he said,

Highlighting the benefits of safe sanitation, the Vice President referred to UNICEF’s study and said,

With cleanliness a family can save Rs. 50,000, otherwise spent on treatment. In India, around 1 lakh children die every year due to diarrhea.

While addressing the people, he also stated the study done by the Asian Development Research Institute (AADRI) which states how awareness has increased among women’s groups and cases of different diseases has decreased. He said,

Awareness and insistence towards community and personal cleanliness has increased in the women’s groups. In the last years, cases of diarrhea have decreased by 23 per cent and anemia has been reduced by 10 per cent. These findings are hopeful for the future.

Replying to generally asked question, doubt and complaint of citizens that toilets are only on government papers and not in reality, the Vice President told that geo-tagging of newly constructed toilets is being done. He said,

Maintenance, repair and quality of toilets is essential for the sustainable success of this (Swachh Bharat Abhiyan) mass movement.

Local bodies should run continuous awareness programmes and inspire people to use toilets.

Amidst this, the Vice President expressed his concern towards unlawful manual scavenging and deaths of workers. He said,

This inhuman practice must end immediately. In spite of the law, continuation of this practice raises questions about the morality of our society and the commitment of the government towards the law. The death of manual scavengers creates suspicion on us being civilised.

He also talked about the current status of solid and wet waste management in India. He said, in cities, door-to-door waste collection is being done only in 68 per cent of the wards. Only 23 per cent of the collected waste is processed.

Also Read: Human Waste Turned Into Manure Is Being Used For Farming: A Success Story From Jharkhand

As part of ‘Swachhata Hi Seva’ awareness programme at Lakhatanga in Ranchi, Jharkhand, the Vice President participated in construction of sanitation pit and plantation drive.

Champions Of Earth: PM Modi Awarded For His Commitment To Environment, Including Efforts To Eliminate Single-Use Plastics By 2022