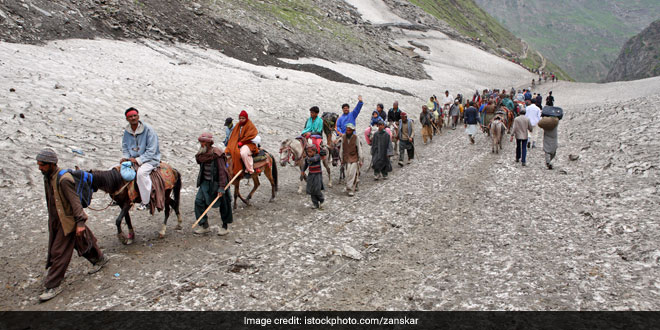 New Delhi: Every year around July Amarnath cave, a Hindu shrine dedicated to Lord Shiva situated in Jammu and Kashmir’s Pahalgam, opens for pilgrims. This year the journey will start from July 1 and go on till August 15. The Amarnath cave is one of the highly revered temples and witnesses lakhs of devotees (2.85 lakh in 2018: Shri Amarnathji Shrine Board) making an annual pilgrimage to the holy cave despite challenging mountainous terrain.

This year in addition to introducing QR coding of Yatra permit forms, the mobile application for pilgrims to access all the details, the Shri Amarnathji Shrine Board (SASB) is taking additional care for proper garbage collection and disposal, construction of toilets and maintenance of sewage treatment plants, to ensure better sanitation during the Yatra.

This is not the first time SASB is focusing on sanitation arrangements on the Yatra route. We have been doing it for years, it is just we supplement it every year, says Anup Kumar Soni, Additional Chief Executive Officer, SASB, while speaking to NDTV.

Governor, Jammu & Kashmir, and Chairman of Shri Amarnathji Shrine Board, Satya Pal Malik, was briefed about the sanitation provisions being made for this year’s yatra earlier this week.

Three key arrangements for swachh Amarnath Yatra 2019 by Shrine Board include:

Bottle catchers are devices to attract the pilgrims to discard their plastic water bottles in those bottle catchers only. The plastic bottles are shredded so that they don’t pollute the surrounding environment. On the other hand, bio bins are installed for the collection of organic waste like mule dung. These bins have microorganisms that convert this waste into compost.

3. 1,515 color-coded bins to be installed for on source waste segregation. Three kinds of bins will be placed for segregation of biomedical, bio-degradable and non-bio-degradable wastes during the Yatra.

While yellow colour bin will be used for biomedical waste, green has been kept for bio-degradable and blue for non-bio-degradable waste, says Mr Soni.

To ensure effective segregation of waste into biodegradable and non-biodegradable and then its disposal, Deputy Commissioners of Ganderbal and Anantnag districts, CEOs of PDA and SDA and General Manager (Sanitation), SASB have been asked to keep a close watch.

Taking the sanitation measures a step ahead, SASB has also planned for the scientific treatment of waste water. For the same, two decentralised sewage treatment plants (STPs) have been commissioned at the Baltal and Nunwan Base Camps.

Related Topics:
Jammu and Kashmir sanitation Toilets
Up Next