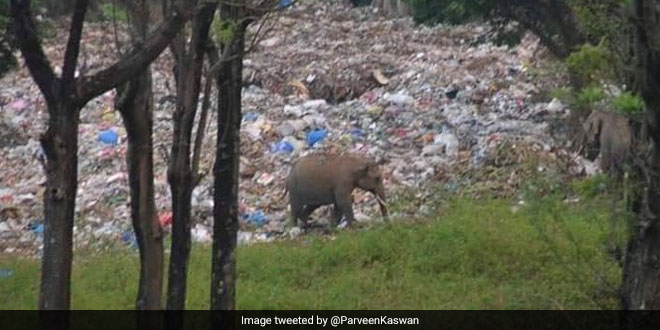 New Delhi: ‘When cities expand, our dump yards also expand. Forest land seems an easy target for them. This is what our plastic and other waste is doing to wildlife. A marvellous creature on human waste,’ reads the caption of the recent viral photo of an elephant looking for food on a land filled with plastic waste. Ever since the Indian Forest Service(IFS) officer Parveen Kaswan first shared the picture on Twitter, people from all walks of life have come together to share the grim reality of plastic crisis on our planet. The picture has been shared by thousands of people on social media with around two thousand likes.

While some Twitter users call the picture horrifying, others urge the citizens to give up the use of plastic items.

This is horrifying! Humans need to be stopped! https://t.co/6aRzmaDkqy

This looks so scary like a scene from a futuristic movie. Every one should be scared of what they are doing to their future generations ???? https://t.co/WAlcGxTYpq

Some share the unfortunate plight of the country and adds that plastic pollution is on a continuous rise irrespective of the awareness drives being carried by the government or environment warriors.

Sad! Unfortunately, the more awareness is raised against the use of #plasticpollution, the more plastic is seen around. One day the plastic we use for consumables, will consume us!???? https://t.co/RQSLp588UH

If this does not inspire people to act what will?

Saying no to single use plastic is an action we all can surely commit to for the ???? and your children.

If you are seeing this, don't use plastic today 🙂 https://t.co/2tgORiGV0k

A Reality Check On Plastic Waste

A recent report by Centre Pollution Control Board (CPCB) highlighted that plastic waste generated in India in the year 2017-18 was 660,787.85 tonnes and even said that the country is generating much more plastic than it is reporting. To put the waste generation statistic in perspective, 660,787.85 tonnes of waste is enough to fill 66,079 trucks.

Experts say that plastic takes approximately 500-1000 years to degrade itself, on the other hand, UN Environment has stated that researchers have estimated that more than 8.3 billion tonnes of plastic has been produced since the early 1950s. And about 60% of that plastic has ended up in either a landfill or the natural environment.

The worrisome part, plastic takes around 500-1000 years to fully decompose itself which underlines the grim fact that whatever plastic we all have used till now can still be found on the planet in some form. And that is the creating havoc on the planet.