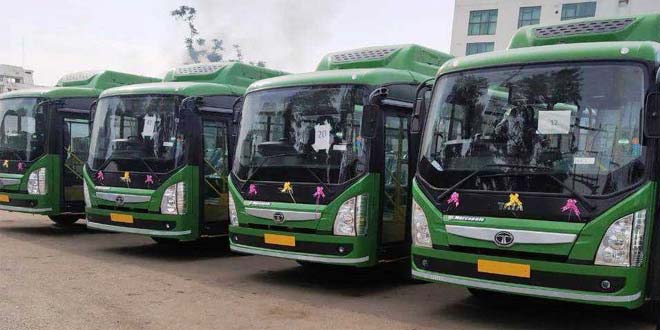 New Delhi: Giving a boost to the central government’s vision of electrification of public transport, Jammu and Kashmir State Road Transport Corporation (JKSRTC) has deployed four fully electric buses for pilgrims visiting the Vaishno Devi Temple, one of the most revered holy places in India. These pollution-free buses have been plied on the 45 kilometer route between Jammu Railway Station and Katra, the town where the Vaishno Devi shrine is located. Flagged off by advisor to Jammu and Kashmir (J&K) Governor, K. Skandan, on Monday (May 27), these buses mark the start of operationalisation of electric mobility in Jammu City.

While talking to NDTV about this green move, a senior official of JKSRTC said that as part of the state government’s green mobility initiative, JKSRTC, in March announced its plan of plying 40 electric buses – 20 in Jammu and 20 in Srinagar. He also said,

The transport body received buses in April but could not start the operation as the model code of conduct was in place. While four buses have started operating in Jammu, buses in Srinagar will hit the road by the next month. These buses can be booked through the window ticketing system and online passenger reservation system (OPRS).

The e-buses deployed in Jammu city have been manufactured by Tata Motors which is supplying the vehicles to Indore, Lucknow, Assam, and Jaipur. As per JKSRTC, each e-bus costs around Rs. 1 crore and is eligible for incentives under Faster Adoption and Manufacture of (Hybrid and) Electric Vehicles (FAME) scheme, launched by the Ministry of Heavy Industries and Public Enterprises (MHIPE) in 2015 to promote electric mobility in the country. In this, 60 percent of the cost of these buses will be borne by the center while the rest 40 percent will be paid by the state government.

The e-buses can run at the speed of 80 kilometer per hour and can cover a distance of around 150 kilometer on a single charge and have a capacity of carrying 50 passengers (30 sitting and 20 standing) comfortably. JKSRTC has installed one charging station in its depot which is equipped with a fast charger that has the capacity of charging one bus from zero to 100 per cent in 90 minutes and only 0.8 units of electricity will be spent on every kilometer. Currently, the fare has been fixed at Rs. 3 per kilometre. This may be revised once more buses are plied in the city and will be finalised by next month.

The buses have been equipped with hi-tech security features like CCTV (Closed Circuit Television) camera, GPS (Global Positioning System) to monitor the movement of the vehicle, panic button in every seat and emergency door. The official informed,

Tata Motors has trained the JKSRTC drivers before handing over them the operation of these hi-tech electric buses.

As per the official, with support from the state government, JKSRTC will plan on further increasing the electrification of public buses in the state to control carbon emissions and keep in check the rising number of local matadors. He said,

Our emphasis is on running more electric buses that would protect the environment and also benefit the people.

Related Topics:
Electric Vehicles Jammu and Kashmir
Up Next

Menstrual Hygiene Day: Mural Installed In Guwahati To Break The Silence Around Periods