New Delhi: Open defecation, poor standards in terms of cleanliness and sanitation were some of the few problems that have rapidly grown along with India’s economic status. Since the launch of Swachh Bharat Abhiyan in 2014,  more than 4.3 crore toilets have been built in last two and half years and five states including Kerala, Sikkim, Himachal Pradesh, Rural Haryana and Rural Uttarakhand have been declared  Open Defecation Free (ODF). The government has set a fresh target to make 300 districts ODF by end of this year. So far, of the total 679 districts in India, 149 districts (and 2 lakh villages) have already been free from open defecation as per the figure given on the Swachh Bharat Mission (Gramin) (SMB-G) portal. With 300 districts going ODF by end of this year, almost 44 per cent of rural population (which is 7,53,573) will have access to individual or community toilets.

As per the ‘Roadmap to Swachh Bharat Mission’ report, only 9 districts had attained the ODF mark in March 2016 and by end of 2016, 65 districts went ODF. As per the latest figure mentioned in the report 137 districts were ODF until May 2017.

When India had reached the landmark of 100 districts becoming ODF in March this year, Prime Minister Narendra Modi had announced it on twitter and declared ‘Clean India Mission’ a mass movement, “I am glad that the Swachh Bharat Mission is a mass movement, with over 100 districts now Open Defecation Free. #MyCleanIndia.”

I am glad that the Swachh Bharat Mission is a mass movement, with over 100 districts now Open Defecation Free. #MyCleanIndia pic.twitter.com/1X85OCoHoH

To initiate a silent and healthy competition among the districts, the government has a provision of ranking districts under the ‘District Performance Index’ on their Individual Household Toilets (IHHL) and its ODF coverage. According the latest results, five of the districts – Dadra And Nagar Haveli (0.00%); Jogulamba Gadwal, Telangana (4.00%); Madhubani, Bihar (8.08%); Muzaffarpur, Bihar (9.03%) and Supaul, Bihar (9.62) – have been ranked at lowest positions. 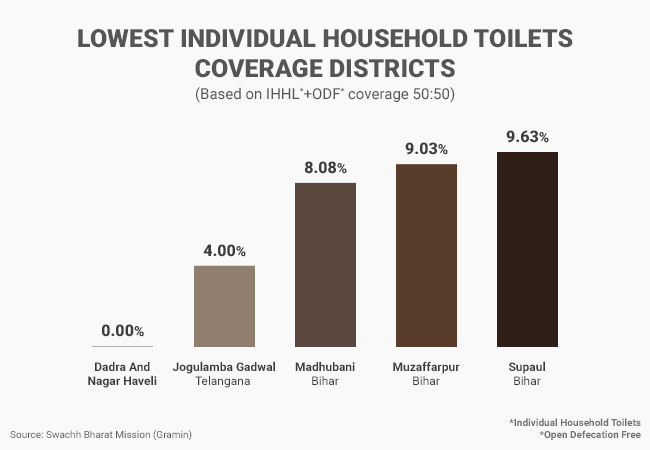 On an interesting note five Gujarat districts – Amreli, Anand, Dangs, Kheda and Kachchh – have appeared in the ‘ODF Champions Corner’. It is no surprise that all five districts have been from Gujarat considering it is likely to be the sixth state to be declared ODF. 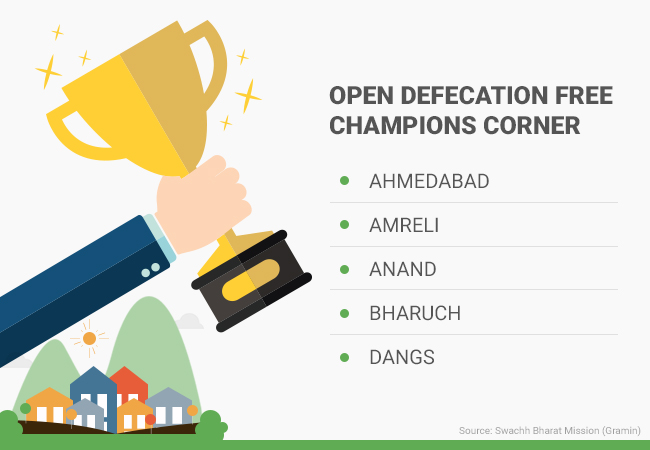 Cleanliness Drive Has Been A Big Support In Fight Against Coronavirus, Says PM Narendra Modi As He Inaugurates Rashtriya Swachhata Kendra

Rashtriya Swachhata Kendra is an interactive experience centre in New Delhi, where the installations will introduce future generations to the journey of the world's largest behaviour change campaign, the Swachh Bharat Mission

COVID Warriors: From Providing Medical Equipment To Hospitals To Feeding The Hungry, This NGO Is Doing It All

COVID-19 Explainer: When Will A Coronavirus Vaccine Be Ready?

India’s Single-Day Count Of COVID-19 Cases More Than That Of US, Brazil In Past 7 Days: WHO Data

If COVID-19 Is Defeated In The 10 Worst Hit States, The Entire Country Will Emerge Victorious: Prime Minister Narendra Modi

Coronavirus Explained: What Are Super-Spreaders And How Are They Responsible For COVID-19 Transmission?

Coronavirus Outbreak Explained: What Is T-Cell Immunity And How Does It Provide Defense Against COVID-19?