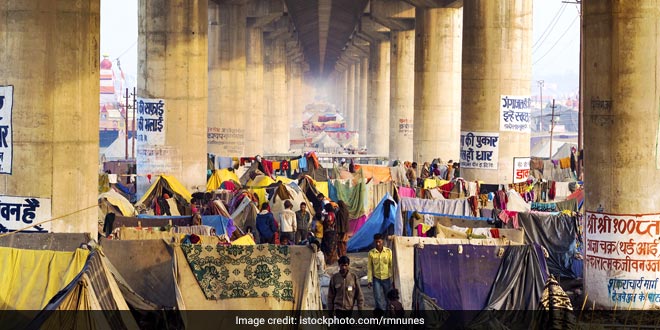 Mumbai: Slum dwellers from Dharkar basti carrying buckets or plastic bottles and walking a couple of kilometres to defecate near the railway tracks is gradually becoming a thing of the past in Uttar Pradesh’s Allahabad city. The credit goes to Allahabad Municipal Corporation’s (AMC) new initiative of issuing toilet subsidy cards to poor families, those living below the poverty line (BPL). The unique initiative was started after the city recorded open defecation cases despite attaining the open defecation free (ODF) status and providing toilet access to every resident.

There are a total of 80 wards in the city and people from all the wards have been given a toilet access either through public, community or individual toilet. Last year in December we had self-declared the city ODF and six months later the ODF certificate was issued to us by the Quality Council of India and despite that people were going out in the open to relieve themselves, Rahul Srivastav, Management Information System, Swachh Bharat Mission official tells NDTV.

On analysing the reason as to why people were not using toilets, the administration found that many families were unable to afford the price charged at pay-and-use-toilets.

Though the price at public toilets is less than Rs 5, it is too high for people living in slums. And a person may want to use the toilet multiple times in a day and paying each time is not feasible. In a meeting conducted last month, the suggestion to give monthly toilet passes at subsidised rates was explored for a few days, says Mr Srivastav.

There are about 15 slum clusters in the city and most of the slum dwellers are daily wagers who at times cannot even afford two meals a day. There are families who can afford to pay the toilet fee only for one person. One such family is of Ramadhir Singh.

I have six members in my house and only one of us could afford to use the pay-and-use toilet, so we used to take turns every day and the rest would just go to the railway track and defecate openly, says 43-year-old Ramadhir who is a daily wage labourer working at a construction site.

After holding discussions with the senior officials from AMC, it was decided that monthly toilet subsidy cards would be issued to beggars and families living below poverty lines to use public and community toilets. There are 125 public and 60 community toilets in the city and caretaker of each toilet has been given the authority to issue the subsidy card.

Anyone who wants to avail the subsidy card can go to caretaker and take it. No ID proof or any other legal documents are required to make the card as most of them are migrant workers or beggars. Monthly card will be issued once a payment of Rs 100 is made. All the family members, irrespective of number, can use the card, says Mr Srivastav.

Like Ramadhir, 33 other families from the basti have a toilet subsidy card now and no member from those families defecate in the open anymore confirmed a ward sanitary inspector.

It has been a month since the initiative was started, and majority of the families have already been issued the card. For families who still cannot afford the card, the AMC is planning to subsidise the cards further and bring down the price.

Supreme Court Stays Construction In Some States, Union Territories Till They Frame Policy On Waste Management