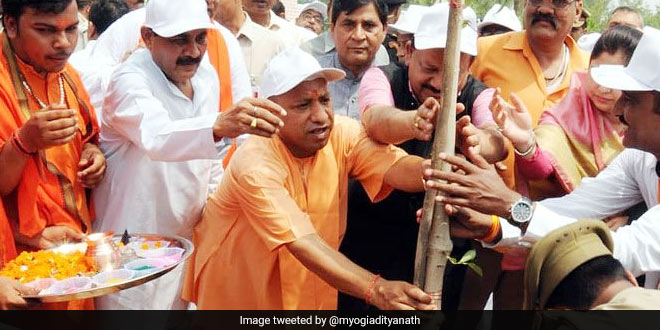 Agra: Huge plantation drives ordered by Uttar Pradesh Chief Minister Yogi Adityanath and his predecessor Akhilesh Yadav have prompted green activists to remark that these are “paper trees to be found only in government files.” Former Chief Minister Akhilesh Yadav set a Guinness World Record for planting 50 million saplings in a day in 2016. And now Chief Minister Yogi Adityanath has set a target of planting nine crore saplings by August 15. “Trees rich in medicinal properties and of religious significance will be planted across the state,” an official has said. Saplings are being procured from private nurseries too, he added.

The green cover in Uttar Pradesh remains a dismal 9 per cent, against the national target of 33 per cent. Green activists in Agra doubt the government claims.

These are paper trees to be found only in government files. The ground reality is different, said Sandeep Agarwal, an environment activist.

For 90 million saplings, we need 2,25000 hectares of land, if the distance between two saplings is kept 5 metres. The Akhilesh Yadav government planted 50 million. So now where’s the space? Even if the saplings are planted, who will take care of them? questions Mr. Agarwal.

Vineeta Mittal, a passionate tree planter, says plantation can be carried out along the Yamuna.

By creating green belts along rivers, any number of saplings can be planted. The survival rate of such saplings too can be high as the plants will get the required moisture from the nearby river-bed, says Vineeta Mittal.

The Yamuna and Agra-Lucknow expressways, dozens of flyovers, the inner city ring road and widening of the National Highway to Delhi have gobbled up acres of green cover, exposing the Taj Mahal to dust-laden winds from Rajasthan desert, says green activist Shravan Kumar Singh.

The Supreme Court had directed that a green buffer be created to insulate the historical monuments from air pollution.

But there has been no significant improvement in the conditions around the Taj Trapezium Zone, says Ravi Singh, a progressive farmer-activist of Barauli Ahir block of Agra.