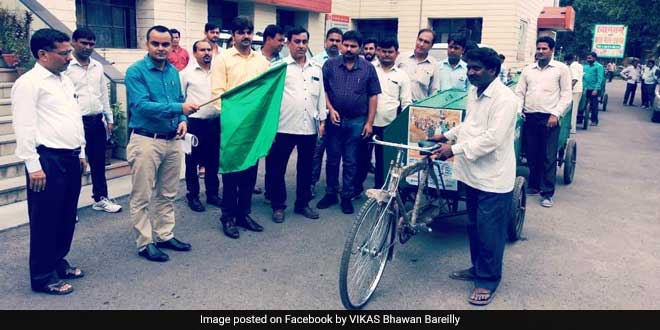 New Delhi: Civic bodies in cities and urban areas are responsible for waste management and have often been at the heart of spreading awareness and consciousness among people to manage waste properly. Waste management in rural areas is often ignored due to lack of both infrastructure and awareness among people, but Bareilly in Uttar Pradesh is working hard to become an exception. Waste management being an important component of the Swachh Bharat Abhiyan, the district administration of Bareilly has begun focusing on composting and garbage collection in the district. A fleet of ten garbage-collection tricyles were flagged off on August 6 by Chief Development Officer Satendra Kumar.

Lagging behind in the initial years of Swachh Bharat Abhiyan, Uttar Pradesh has finally picked up pace and is constructing toilets at a breakneck speed. Bareilly, which has healthy sanitation coverage of 86 per cent, has turned its focus on waste management. The district administration has approved the digging up of composting pits in villages. Villagers can now self-compost in their backyards by dumping wet waste into pits and turn it into compost. Close to becoming open defecation free (ODF), Bareilly’s district administration has already started preparations to secure ODF plus status for the district.

We will become an ODF district within this month but are not looking to restrict ourselves to the ODF status. We have already made plans to make the district ODF plus and are encouraging locals to take up composting at their own backyards. The new fleet of garbage-collection vehicles will operate on the outskirts of the district and collect dry waste, said a district administration official from Bareilly.

Waste stabilisation ponds to be used for composting are being dug across 2,083 villages in the district. The village panchayats have been directed to purchase similar garbage collection tricycles for waste collection and transport. Dry waste collected by the village panchayats will be sent for recycling to the nearest waste treatment plants. Mr Kumar said that even two garbage collection tricycles per village will be sufficient for households in a village to dispose waste in the tricycles, instead of disposing it anywhere.

“The lack of a designated waste disposal space causes problems for villagers, and they often do not have any option but to dispose waste wherever they get some space. If stabilisation ponds are dug, people can easily dump wet waste and use the compost for agricultural purposes. This will in turn become an additional source of income for gram panchayats, who can also use the compost for business purposes,” said Mr Kumar.

Government Issues Advisory, Asks Citizens To Not Use National Flags Made Up Of Plastic