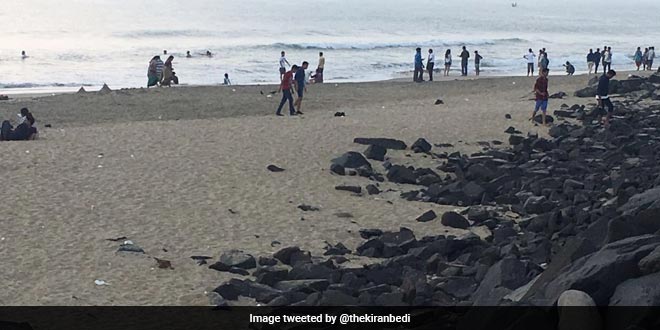 Mumbai: For most of us, a casual stroll on a beach is associated with trash lying along the beach and it was no different for Puducherry Lieutenant Governor Kiran Bedi on a Thursday morning. Besides, spotting litter on the beach, she also caught a few people urinating and defecating in the open despite having a toilet in the vicinity. However, unlike majority of the Indians who are now used to ignoring the litter and continuing their morning walks, Lieutenant Governor Bedi decided to change the plight of the beach and immediately got in touch with the municipal authorities.

2.) This morning dedicated to beach cleaning. And put in place a team approach to maintain it here after. Security with Sanitation. ( Contn) pic.twitter.com/Bb5xaGwQwv

Within no time, Lieutenant Governor Bedi armed herself with a mask and gloves and started to clean the beach. Seeing her clean the beach, SSP police, citizens, community volunteers, Life Guards and municipal staff joined in and the activity turned into a 3-hour beach cleanup drive.

This morning my casual beach side walk became a three hours of beach cleanup drive. This happened because as I walked the road I saw the new extended beach littered with garbage and plastic. We procured gloves, bins and bags and started to cleanup the beach from one end to another, she said.

Questioning the behaviour of the locals and tourists, she posted a video on her social media account. In the video she can be seen asking two people the reason behind their act of relieving in the open.

While crores were spent into reconstructing the beach, litterers litter/soil it. People don’t care to walk a bit to ease themselves. When will we change? See what happened when my morning walk, turned into a two hours of cleaning and catching people in the act, she said in her post.

While Crores were spent into reconstructing the beach, litterers litter/soil it.
People don’t care to walk a bit to ease themselves.
When will we change?
See what happened when my morning walk, turned into a two hours of cleaning and catching people in the ACT!! @smitaprakash pic.twitter.com/LX09tzFDYJ

After cleaning the beach, she appealed everyone present on the beach to leave the beach clean and take the onus of cleaning it if found in a deplorable condition,

“People have a right to a clean beach. But they have equally a duty and responsibility to leave it clean for others. Every right has a responsibility. Be it a public official or a citizen,” she said.

Puducherry Beach this morning.
The Beach-Team has kept it clean.
Thank #Swatchta Corp & all public officials of Municipal Corp and the night Police who ensured.???????? pic.twitter.com/rAEnSoOE5V

To sustain the cleanliness of the beach Lieutenant Governor Bedi introduced a list of new rules to be followed in future. The Police Personnel has been roped in to look after the safety of the beach. The Swachhta workers who are in-charge of keeping the streets litter-free will also have to now extend their services to the beach.

3) Cleaned up the beach.
And put in place a Team-Approach comprising of Beach Sanitation staff and Beach Security round the clock.
Shall be closely monitored hereafter.
No letting up.
Litterers shall be prosecuted..@PMOIndia @HMOIndia @ANI @smitaprakash @SundariNanda pic.twitter.com/AZgfLZ1oIi

To monitor the status of the beach regularly Lieutenant Governor Bedi has asked the police and the municipal corporation to post four images of beach on an official group.

As for making people accountable, they will be issued a violation ticket if found urinating on the sides or littering. Failure to pay the fine amount will lead to challan and a summon in the court. The police staff will also be in-charge to spread awareness. They will have to make announcements on cleanliness, sanitation and hygiene.

A few hours after the new rules were introduced, the municipal corporation placed neon-coloured bins across the beach and a Municipal Commissioner was on an inspecting duty on Friday morning.