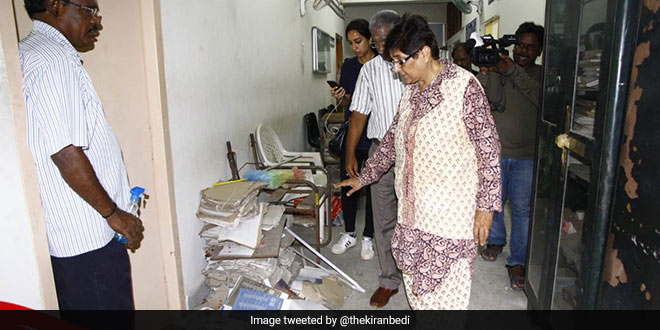 Mumbai: Puducherry Lieutenant Governor Kiran Bedi was recently taken aback by the dirty state of a government office during a visit. After spotting garbage dumped indiscriminately in the premises of Electricity department’s main office, she ordered an immediate clean-up drive with the help of the office staff and got the main part of the entrance cleared of the garbage and other junk items. She further directed them to keep the premises clean and tidy.

She asked the officials to ensure that the office was rid of the ‘unclean’ environs. Later speaking to reporters, the Lieutenant Governor said she would visit other government departments soon to ensure that their premises are clean. While Saturdays will be dedicated to inspecting government offices, Sundays will be dedicated to examining water bodies in the Union Territory. In the upcoming Saturday, municipal offices will be examined tweeted Lieutenant Governor Bedi.

“We began with Power Department with excellent results. Everyone got involved in the clean-up and felt good about the change they brought about themselves. Next Sat Municipal/Police.”

Alongside #WaterRichPuducherry TeamRajNivas added focus to #cleanpublicoffices over weekend rounds.
We beganwith Power Department with excellent results. Every one got involved in the clean up and felt good about the change they brought about themselves. Next Sat Municipal/Police pic.twitter.com/q8xT8rY39m

Prior to this, Lieutenant Governor Bedi visited the Oussudu lake, one of the major water bodies, and inspected its maintenance on the same day. As part of the Van Mahotsav week, she also planted trees around the lake. She held a special meeting with officials of various departments at the Raj Nivas to highlight the importance of protection of sub-soil water.

Of the total four districts, only Mahe has been declared Open Defecation Free so far. As for the construction of toilets, 989 individual households have been constructed of the total 9,187 applications. The sanitation coverage in rural presently stands at 49.2 percent, which is fourth lowest among all states and union territories. Last year, the authorities had hoped to declare Puducherry free from open defecation on October 2. However, due to slow pace of toilet construction the deadline has now been extended to October 2, 2018. In a recent statement, Puducherry’s Agriculture and Education Minister R Kamalakannan had promised that around 45,403 households will get toilet access by October this year.