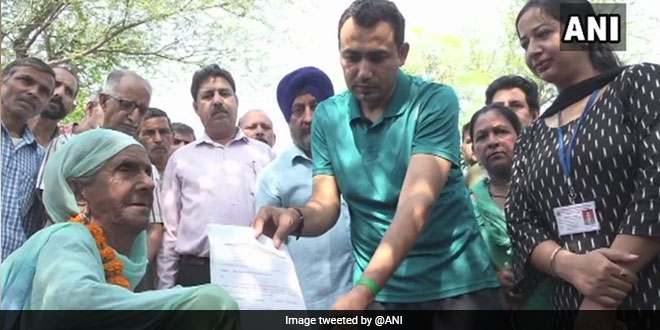 New Delhi: In May, when 87-year-old Rakkhi Devi from Jammu and Kashmir’s Badali village in Udhampur, decided to break free from the practice of open defecation by building a toilet, she hit a roadblock. She neither had the money nor the resources to begin the construction. One would have imagined that at her age she would give up on the hope of a toilet, after all, she had spent nearly nine decades of her existence defecating in the open fields. But not Rakkhi Devi. She decided to take matters into her own hands and build herself a toilet.

On Sunday, recognising her swachh efforts, Deputy Commissioner, Udhampur, Ravinder Kumar felicitated her as a Swachh mascot for the state and also handed over Rs. 12,000 to the octogenarian for constructing a concrete toilet on her own.

Calling Rakkhi Devi an inspiration for other women of the village, Mr Kumar said,

It is time for people to change their traditional mindset about building a toilet. I was surprised to know that an 87-year-old woman built the toilet herself without any help. I salute this spirit. I urge everyone to come forward and contribute their bit in keeping the village clean and green. What Rakkhi Devi has done is an incredible thing, she is an inspiration for all of us. Collective efforts by each one of us can help in making all the villages ODF in India.

Rakkhi Devi disclosed how she had been defecating in the open for decades without knowing its ill effects. She adds,

I am poor and don’t have money to build a toilet. But, I didn’t let money come on my way, I wanted the toilet for the better future of all my children, I simply couldn’t let them suffer like I have.

She further explained how she succeeded in constructing a toilet for her village, she said,

“My son made the mud for the toilet after which I levelled the bricks and did the masonry work myself. The toilet work was completed within a weeks’ time – just these 7 days of hard work will pay off for rest of my life and these children’s life.”

The warrior signs off by saying,

I urge everyone to use a toilet as defecating in open leads to many kinds of diseases. Everyone can construct a toilet, one just needs the will to do it.

Also Read: Once A Swachh Underperformer, Jammu and Kashmir Builds 1.22 Lakh Toilets In 15 Days To Up Its Sanitation Coverage to 60 Per Cent