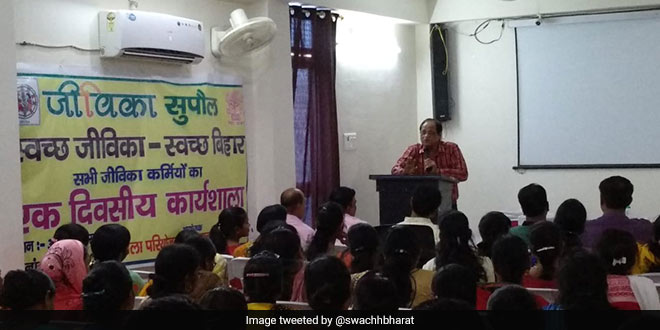 New Delhi: The underperforming trio – Uttar Pradesh, Bihar and Odisha, severely underperformed in the Swachh Bharat Abhiyan till 2017. None of these states had rural sanitation coverage of more than 50 per cent, and many officials associated with the rural wing of Swachh Bharat Abhiyan were worried how these states would conclude the construction of toilets by the October 2019 deadline of 100 per cent open defecation free (ODF). While Uttar Pradesh’s performance has vastly and rapidly improved (the state has rural sanitation coverage of 79 per cent at present) thanks to toilet construction at breakneck speed, both Bihar and Odisha’s sanitation coverage languish at below 60 per cent. To give Bihar’s rural sanitation performance a much needed boost, the ‘Swachh Jeevika – Swachh Bihar’ campaign has been started by the state government on July 9.

Bihar has seen the construction of 56 lakh toilets in the last four years, and needs to build nearly 50 lakh more to go ODF next year. The ‘Swachh Jeevika – Swachh Bihar’ campaign is an initiative under Jeevika, Bihar state government’s poverty alleviation programme. Jeevika has been instrumental in initiating several nutrition, health and hygiene programmes across rural Bihar, collaborating with district administrations, Anganwadis and NGOs. The ‘Swachh Jeevika –Swachh Bihar’ programme aims to provide safe sanitation facilities to members of self-help groups (SHGs). The campaign, which will go on for the next 45 days will look to mobilise rural communities in Bihar, members of which are SHG members. They will be trained in toilet construction, importance of behavioural change in communities and how toilet usage can be sustained.

Under the 'Swachh Jeevika – Swachh Bihar' campaign that aims to provide safe #sanitation facilities to the members of the self-help groups, an orientation programme for the cadres of DPCU was organised in Muzaffarpur, #Bihar. pic.twitter.com/EEO6UcakNo

SHG members are responsible for ensuring that rural communities are participating actively in health and sanitation programmes, and are benefiting from it. If they themselves do not have access to toilets in their homes, how will they direct others towards safe sanitation? This programme will ensure that SHG members know about the importance of sanitation, before imparting the same knowledge to others, said Dr Ashok Kumar, Monitoring and Evaluation Officer, Swachh Bharat Abhiyan (Bihar).

On the day of its launch in the state, ‘Swachh Jeevika – Swachh Bihar’ campaign saw multiple orientation programmes and workshops being held. In Muzaffarpur, an orientation programme was held for Jeevika cadres, where safe sanitation was discussed in detail. At Supaul, an orientation programme was held for block level officials and Jeevika cadres. Cadres were given insights about the Swachh Bharat Abhiyan, how toilet construction can improve community health and both construction and usage of toilets are important. In Barachatti and Guraru districts, meetings were held by Jeevika cadres, during which SHG workers were briefed on how a district can be transformed into an ODF one.

“The duration of the campaign is a lengthy one, and we hope that during these 45 days, SHG workers get a thorough idea on how to construct toilets and sustain their usage. Once SHG workers themselves are equipped to address the sanitation question, we will see speedier construction of toilets across the state,” said Dr Kumar.

Only three of Bihar’s 38 districts have sanitation coverage above 90 per cent. The dismal state of sanitation in Bihar has been consistently attributed to district administration’s inability to reach out to the people with the message of Swachh Bharat Abhiyan. With the Swachh Jeevika programme focusing on SHGs and empowering them, Bihar hopes to improve its rural sanitation numbers.