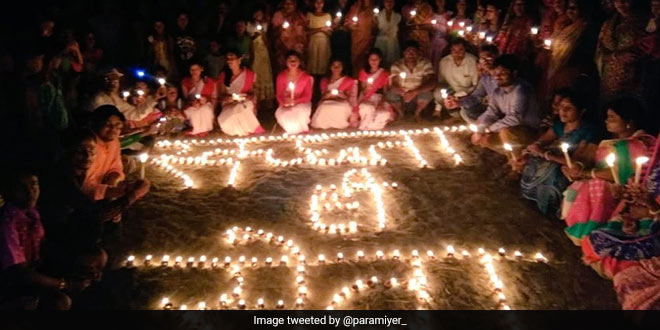 New Delhi: On October 2, 2014, Prime Minister Narendra Modi launched an ambitious cleanliness programme – the Swachh Bharat Abhiyan with an aim to fulfill the dream of Clean India as envisaged by Mahatma Gandhi. A deadline was set of making India 100 percent open defecation free (ODF) by October 2, 2019 by Mahatma Gandhi’s 150th birth anniversary. Since then a lot has changed, Swachh Bharat Mission has achieved significant milestones in both the rural and urban front and has triggered a nationwide flurry of activity to improve sanitation and cleanliness in the country. The government has repeatedly described it as one of the biggest people’s movement. In last four years, 9 crore toilets have been constructed in India and more than 4.5 lakh villages, 450 districts, 20 states and Union Territories have been declared open defecation free successfully.

Moreover, every year Gandhi Jayanti on October 2 is celebrated as Rashtriya Swachhta Diwas, and on the occasion more regions of the country are declared ODF.

This year too, India plans to keep up with the tradition of announcing regions free from the practice of open defecation and plans to make some big announcements. As it is Prime Minister Narendra Modi launched ‘Swachhata Hi Seva’ movement, a 15-day cleanliness drive which will culminate on October 2, with people from across country coming together for various cleanliness activities. Here is what is lined up to commemorate the day this year:

On September 29, President of India Ram Nath Kovind inaugurated the Mahatma Gandhi International Sanitation Convention in New Delhi and asserted that Swachh Bharat is a revolution playing out in real time. He said, “The mission provides every one of India’s 1.3 billion people  an opportunity for a dramatic leap.” He also added that he is confident that the sessions and proceedings of this Convention will result in actionable ideas and in a powerful statement towards achieving the Sustainable Development Goals, and particularly SDG 6.

Chief Minister, Devendra Fadnavis was invited to share Maharashtra’s success story with global leaders since the state is one of the top performing states in Swachh Bharat Abhiyan. Mr Fadnavis at the conclave stressed on the state’s plan to sustain its ODF tag and said,  “After becoming ODF, we have given plans of sustainability to every Village Panchayat, encouraging them by presenting awards every year, even kids engaged themselves in awareness drive in the state. The state had just 45% toilet cover since independence (1947 to 2014) & we achieved remaining 55% in just 3 years.”

On his part, Chief Minister Yogi Adityanath stressed on the fact that Uttar Pradesh will achieve the ODF status, much before the nation’s target of 2019.

Vice President Venkaiah Naidu added that India, a country of 1.3 billion people, is large and complex, but Swachh Bharat Mission has been a great unifier.

From Rural To Urban Ministry Plan, The Swachh Plans: The Central Government has adopted Swachhata Hi Seva movement in an unique way, the Ministry of Urban Development (MoUD) has advised municipalities across the country to conduct ‘plogging’, a unique form of exercise which combines jogging with collection of garbage from the roads, with citizens from September 15 to October 2. Originated in Stockholm in 2016, plogging is a very common phenomena in Scandinavian countries like Norway and Denmark and European cities of Edinburgh and Paris. The word has been borrowed from the Swedish word ‘plocka upp,’ which means ‘pick up,’ and all people are supposed to do is jog and pick up a garbage from the roads.

Uttar Pradesh: Chief Minister Yogi Adityanath at the launch of Swachhata Hi Seva movement on September 15 told Prime Minister Narendra Modi that in accordance with the Baseline Survey (a survey done in 2012 to identify how many households in India do not have access to toilets) Uttar Pradesh will be declared open-defecation free by October 2 this year, and by 2019, every home is expected to have access to toilet.

According to the numbers, the state has been successful in constructing more than 1.7 crore Individual Household Toilets in the rural areas, whereas it has declared 58,982 villages, 29,295 gram panchayats, 116 blocks and 10 districts open defecation free. In urban areas, 6.6 lakh toilets have been constructed and out of 653 urban local bodies, 234 have been declared ODF of which 83 have been certified ODF by Quality Council of India (QCI).

Karnataka: The state this year aims to go big on October 2 and plans to announce both its rural and urban areas free from the practice of open defecation. Currently, the rural areas have the sanitation coverage of 97 per cent, while Urban areas have a toilet coverage of only 50.84 per cent, yet the state is confident that this Gandhi Jayanti it will achieve the coveted ODF Tag.

Urban Karnataka has already missed its two deadlines of going ODF back in October 2, 2017 and December 2017 and now the authorities have set a new timeline of October 2 this year. Major cities and corporation in the urban parts of the state such as Bengaluru, Hubli are yet to achieve the ODF targets. Whereas, the rural counterparts in order to achieve the goals by the set deadline have already started taking initiatives, they have launched a new campaign Swachhameva Jayate (Victory for cleanliness), a rural cleanliness and sanitation campaign. It is a door-to-door activity headed by children of primary and secondary schools where they educate people on the importance of building a toilet at home along with other parameters of cleanliness, hygiene, toilet usage and waste management.

Jammu And Kashmir: India’s northern most state is already self-declared ODF, but by October 2, 2018, the state officials expect that Jammu and Kashmir will also get an official ODF tag subject to the third party verification process by Quality Council Of India (QCI).

Telangana: Today India’s rural sanitation coverage has increased to 92 per cent from mere 38 per cent in 2014, but Telangana still struggles to get the tag of Open Defecation Free. According to the Swachh Bharat Abhiyan data, the state has the least number of toilets in the house along with Odisha, Bihar, Uttar Pradesh and Jharkhand.

The state has already missed the deadline of declaring itself completely ODF by April 2018 and has now set October 2 as their new target. K.T. Rama Rao, Minister of Municipal Administration and Urban Development asserted that the state will achieve ODF tag by October 2, 2018 and ODF plus status by October 2, 2019.

Tamil Nadu: With over 52 lakh toilets built within a period of four years in the rural areas, the eleventh largest state in the country, Tamil Nadu is all set to be declared ODF by October 2 this year. The state has a total of 32 districts of which 30 have been declared free from open defecation. While on the urban front, with over 4.37 lakh toilets 490 urban local bodies out of the total 664 urban local bodies have attained the status of ODF.

Apart from states, cities like Noida, Ludhiana and Union Territory Puducherry too are expected to go ODF this October 2.

If these regions are successful in meeting their ODF target by this Rashtriya Swachhta Diwas then India’s sanitation coverage which is currently at 92 per cent will hit a major milestone.

Maharashtra To Get A Plastic Waste Twist In Upcoming Public Toilets