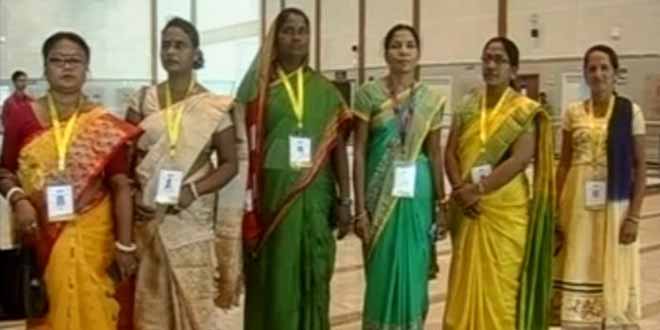 From a pregnant woman digging up pits for toilets to a trained lady mason leading from the front to make her village and other villages in her district, open defecation free – International Women’s Day saw Prime Minister Narendra Modi felicitate some of these women swachch crusaders, during  a conference of women sarpanches at Mahatma Mandir in Gandhinagar on Wednesday. The event was attended by about 6000 people, mostly women.

Also Read: 5 Women And Their Fight For Sanitation

For 30-year old Sushila Khurkute of Palghar in Maharashtra the award for swachhta crusader didn’t matter so much as the feeling of satisfaction when her small village Nandgaon became open defecation free. Seven months pregnant, Sushila dug a pit all by herself for two toilet blocks in her village as part of the campaign to make her village open defecation free. She didn’t stop with just constructing a toilet in her house, a trained mason, she went around the village to spread awareness about cleanliness.

Watch: This Pregnant Woman Dug A Pit Near Her House. All For A Toilet

Another crusader, woman sarpanch from Shalbari in West Bengal – Shibani Dakua, had spent over a year convincing people in her village with a population of 18000 to construct toilets. Her efforts finally bore the fruits. About 1800 toilets have been built in the village in a year’s time. “The villagers wouldn’t listen but we went door to door, formed self help groups, created awareness and tried to convince and finally we were successful,’’ said Shibani.

From east to west, 24-year old Asha Meghwal a villager in Ajmer taluka (district) of Rajasthan used her masonry skills to spread the message of a clean village. With no takers for construction of toilets, she built up a team of masons in the village to build toilets and pave the way for an open defecation free village.

I was constructing toilets all by myself at my home to send across a message. One day the sarpanch came to our house and realising the importance asked me to take up construction of more toilets in the village.

Today, her village boasts of about 50 toilets. Women like Asha, Shibani and Sushila are just some of the women who are part of a larger movement that is taking place across India – a right to a toilet. The felicitation of these women on International Women’s Day underlines the role women are playing in the drive towards a Swachh Bharat.